Standard White - 100%
“It's better looking than you. It can fire machine guns and rocket launchers more accurately than you. It can jump higher than you and it's always got a parachute. Your mother prefers its company to yours. You know what they say: if you can't beat it, own it, and pray people don't notice that all your belongings are cooler than you are.

Note, the production model of this vehicle has a reduced missile capacity.

The Imponte Ruiner 2000 is a modified muscle car featured in Grand Theft Auto Online as part of the Import/Export update.

The Ruiner 2000 is heavily based on the Pontiac Trans Am (KITT) from the TV series Knight Rider.

The Ruiner 2000 is a modern variant of the Ruiner, retaining the overall shape and characteristic features. However, it receives a different front end with a slightly pronounced nose, where the upper center has a small screen with animated red dots when the car's engine is on. The headlights are hidden within the car and act as pop-up units, which retain the square-shaped lights from the standard Ruiner. It also features the same offset cowl induction hood from the standard model in GTA IV but with a vent insert instead of a solid panel. The sides are mostly identical to the Ruiner, but without the side marker lights and all of the silver badges. The cabin is mostly identical, with the exception of the permanently solid roof with a small hatch. The rear of the car retains the lip spoiler, the central plate holder and the quad exhaust setup, but features a black panel containing LED tail lights on the same position as the ones from the Ruiner, with the outer ones being the brake/marker lights and the inner ones the reverse lights and turn signals.

Compared to the standard version, the Ruiner 2000 gains a completely redesigned interior, consisting of dual digital displays with numerous switches below them and RPM indicators in the center, reused from race-type interiors. A radio display can be also seen in the center of the console, facing to the driver side.

Color distribution is similar to the normal Ruiner, with the primary one on the body, interior stitching and details of the steering wheel and the secondary one in the form of two stripes on the lower side, though no longer bearing the "RUINER" name on the sides. The wheels have a unique design, featuring star-shaped rims with hexagonal patterns on each spoke, linear separations and five bolts around the center. These rims can also support a dedicated color, although only naturally-generated examples from Content Creator, missions and Adversary Modes may have one. Purchased examples come with black-colored rims.

The Ruiner 2000 is armed with machine guns and homing missiles located on the lower vents of the front bumper, as well as a parachute hatch on the roof and a power hop mechanism. Both the machine guns and the rocket launchers pop up upon driving it.

The vehicle improves in performance over the regular Ruiner, with increased acceleration and top speed. Powered by the same single-cam V8, coupled to a 5-speed gearbox in a front engine, rear wheel drive layout, the Ruiner 2000 is a great performer on its class, as much as its standard version.

The Ruiner 2000 with its jumping mechanism active.

The Ruiner 2000 with its parachute deployed. 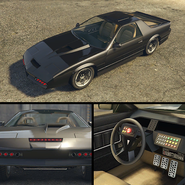 The Ruiner 2000 on the updated Rockstar Games Social Club.

the Ruiner 2000 in the cinematic preview on Rockstar Games Social Club.

A wrecked variant of the Ruiner 2000, only used as a wreckage prop during the mission Breakdown Recovery, in similar manner to the Policew.