ruiner
ruiner3
“What happened in the 80's stays in the 80's. Unless what happened is a little slice of quad-exhaust, side-striped, T-Top heaven - in which case break out the big hair and the trickle-down economics, because we're going to town.”
— Southern San Andreas Super Autos description.

The Ruiner is prominently inspired on the 1982-1984 Pontiac Trans Am, with cues from a variety of other 80s muscles and coupés. The ground effects on the front end are reminiscent of 1985-1990 Pontiac Trans Ams, while the hood resembles that of a first generation Nissan 300ZX Z31 with an optional offset cowl induction hood strikingly similar to those found on 1982-1984 Trans Ams and 1985-1992 Firebird Formulas. The rims resemble those of the Mitsubishi Starion, and the added B-pillars on the rear window may also come from the Starion. The rear window is shaped after the one seen on the first generation Mazda RX-7. The tail lights and trunk spoiler are shaped like those of the Camaro, but the area between and below the tail lights better resembles the Firebird, with "IMPONTE" and "Ruiner 450GT" positioned where the Firebird logo would be. Ruiners may feature "RUINER" decals and stripes along the lower part of the doors, much like that of the Camaro IROC-Z, although the stripes and decals share colors with the ground effects, much like 1982-1984 Trans Ams.

The Ruiner assumes a similar role and build from the Grand Theft Auto: San Andreas iteration of the Buffalo, but features modernized details around. The front end has a slanted profile, with small intakes on the lower edges and a central grille/intake below the bumper area, just behind a plate holder. The turn signals can be seen on the bumper, while a set of square-shaped lights can be seen on the hood area within black housings, under small hatches that resemble pop-up headlights (though no animation is present). The section between the main lights bears silver "IMPONTE" lettering next to the driver-side lamp, while the front of the hood bears the manufacture emblem.

On the sides, a set of marker lights are seen on the front, while the arches and the skirts have a flared profile. Plastic details can be seen around the windows of the cabin area, together with body-colored mirror shells, black door handles and "450GT" badges.

The rear of the car features a lip spoiler, together with a plastic panel on the center and the sectioned tail lights. The center of the bumper features a plate holder, while the bottom of the driver side has a cut-out for the twin circular exhausts.

The Ruiner features a T-top roof, which comes in three different variations: with solid roof panels, with glass roof panels or without roof panels. It may feature a plain hood or with an offset cowl induction hood. Ruiners can spawn in a variety of colors, with the primary one on the body and the secondary one on the mirrors and in the form of two stripes on the lower side, displaying the car's name. A tertiary color is also available for the rims, which is set to white or gold (the latter only available in at least three color sets). The rims have five wide spokes with a pentagon-shaped center and black details.

The Ruiner retains its design from GTA IV, with only minor changes. It features a quad exhaust instead of the dual exhaust present on the GTA IV version. The turbo hood bulge is no longer available and a traditional ram air hood (similar to the Buffalo from Grand Theft Auto: San Andreas) can be applied to it instead. There have also been minor changes to the badges and decals.

As of Patch 1.29, the three T-Top roof options from the GTA IV version are present but cannot be changed by the player and are random at spawn. All variants spawns with its windows rolled up, even without roof panels. Color distribution is the same as before, but the mirrors changed to receive the primary color and the interior stitching matches with the same primary one. The Ruiner's rim design is the same, able to be found in Los Santos Customs under the Muscle category, named "Mecha". There is also an off-road counterpart under the Off Road category, named "Dune Basher". Unique to the stock rims, however, is that the wheel color has a darker tone (although painting the stock wheels is only possible on Content Creator). 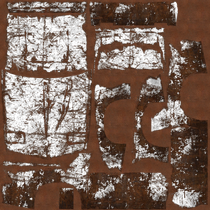 In GTA IV, the car handles quite loosely, being able to perform power slides with ease, and in the hands of a skilled driver, can prove to be an excellently handling vehicle. The car can brake easily, and can accelerate quickly, leaving the player with a well-rounded muscle car, perfect for any criminal getaway. Just be careful for the lack of durability and low ground clearance. The Ruiner is also a great choice for races.

According to its badges, the Ruiner is powered by a large 450 cubic inches (7.4 liter) Fuel injected V8 engine, which is supported by its engine model (a single cam V8, judging by its small details on the cam covers), coupled to a 5-speed gearbox. Its engine sound is identical to that of the Faction and Sabre.

Acceleration is very good, close to cars with a much higher price tag. Its top speed is also excellent; it is brisk, yet controllable.

The suspension is moderately firm, giving the Ruiner much needed grip in the turns, while still loose enough to have some fun with. Handling-wise, the Ruiner is a stellar performer, with constant grip, controllable loss of traction, and a lot of torque. Braking is very good, if not among the best in its class. Crash deformation is acceptable, but can only withstand a few high-speed crashes before stalling.

As in GTA IV, the Ruiner is powered by the same 450cui Fuel-injected V8 (according to badges), coupled to a 5-speed gearbox in a front engine, rear-wheel drive layout. The engine sound is the same as the one on the Dominator.

As of the After Hours update for Grand Theft Auto Online, the Ruiner received livery modifications, not available in Story Mode. 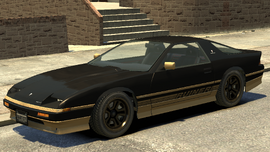 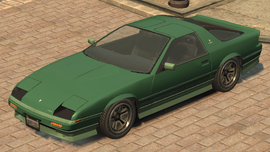 A golden Ruiner in GTA IV.

The Ruiner in the original version of GTA V. (Rear quarter view)

The Ruiner on the updated Rockstar Games Social Club.

The Ruiner in the cinematic preview on Rockstar Games Social Club. 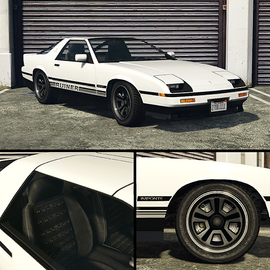 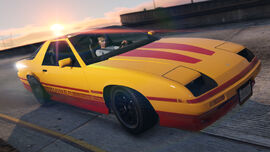 One possible color shade of Ivan's Ruiner in GTA IV.