Yes
“I've dropped some protection at the multistory car park. Pick it up...”
— Juan Cortez to Tommy Vercetti.

The weapon is based on the Ruger Mini-14F, the folding stock variant of the Mini-14 rifle. The gun comes in a grey finish and replaces the AK-47 from other titles.

The following is based on Grand Theft Auto: Liberty City Stories cut content and has not been verified by canon sources. Reader discretion is advised.
Please do not add unverified or speculative content to this article unless confirmed by Rockstar Games or in-game data.

The Ruger was going to be included in Grand Theft Auto: Liberty City Stories but was removed for unknown reasons. The HUD icon for the weapon can still be found in the game files on PS2.

Being an assault rifle, there is no auto-aim, but it can be manually aimed. Its performance is similar to that of the more expensive M4, the main differences being that it has slightly less damage (35 versus 40), lower recoil (manual aim only) and a much lower rate of fire. 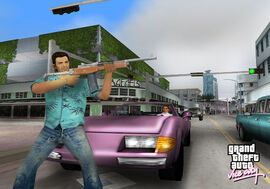 Tommy using a Ruger in a pre-release screenshot of GTA Vice City.

The same model in the original PS2 version having a wooden finish, as well as a longer and more correctly modeled barrel. 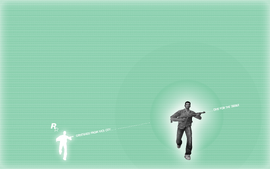