GTA Wiki
Register
Don't have an account?
Sign In
Advertisement
in: Vehicles, Vehicles in GTA V, Bikes,
and 5 more
English

Yes
“An Italian that is rough around the edges but smooth where it counts and plenty of gas in the tank to go the extra mile with sexual analogies.”

The Ruffian is mainly based on the Ducati Monster, with similar engine molding, gas tank, headlight, tail lights, exhaust system and seats, albeit with a longer, wider tail section.

The bike assumes a design similar to the PCJ-600 and the Akuma, where the front section has a carbon-fibre mudguard mounted directly to the chrome fork legs, while the upper area house the headlamps, two independent handlebars and a single analog dial. In the enhanced version, the Ruffian uses the "Sports Bike" dial set also used on the aforementioned bikes, specifically the speedometer.

The main body of the bike features a black frame around the upper and rear area of the engine bay, while the fuel tank is large and has two vented sections around the front and silver lettering on either side, displaying the manufacturer name. The engine bay has the corresponding radiator on the front, the exhaust tubes passing on the frontal and lower area of the same engine bay, and foot pegs mounted on the basic frame, intended for the rider.

The rear section features a black seat for the rider and a passenger, foot pegs on the lower frame intended for the passenger and dual exhaust tubes below, partially covered by a carbon-fibre panel. There is a single red tail light on the rear end and a black plate holder below, with the corresponding license plate and turn indicators beside it. The rear wheel is connected to the vehicle by a dual-sided swing-arm, having a small carbon-fibre mudguard, a single suspension spring and the corresponding chain drive and sprocket on the left.

The Ruffian spawns in two variations: The first one has a small fairing with a small intake, a single circular headlamp above the intake and a glass visor on top, with small mirrors on the handlebars. The second one, on the other part, has no fairing, no mirrors and dual circular headlamps.

The bike spawns in a variety of primary colours applied on the fuel tank and rear section, and the rims use a dedicated wheel colour, which can be painted by selecting a custom rear wheel, applying a colour and change back to the stock wheel (as it won't reset to the default alloy color). The bike uses split six-spoke rims similar to the "Speedway" rims available in Los Santos Customs, with the rear wheel being wider.

The Ruffian is a very quick and versatile sportsbike. Its engine gives it excellent acceleration and decent top speed. Greater stability is credited to its longer wheelbase, which makes cruising at high speeds safer than other shorter bikes. In addition, despite being a sportsbike, it does not notably suffer when driving off-road. While it is clearly not optimal, a skilled driver can make the minor disadvantage seem nonexistent. It is one of the fastest bikes in the game, only falling behind the Bati 801, Akuma and Vader.

On the other hand, cornering does suffer. It is considerably less agile than other motorcycles and is thus not well suited for race circuits with more turns than straights. Stunt agility, however, is notable. Pulling tricks with this bike is quite easy thanks to its high ride height, ease of performing wheelies and light weight.

The Ruffian is powered by a 3-cylinder engine, which is supported by the 3-1 exhaust manifold (3 into 1) seen on the bike. The engine noise appears to be a lower-revving, lower-pitched variation of the one used in the Bati 801 and its RR variant.

* Plates are unavailable if the "Custom Frame" modification is installed.

A standard Ruffian in GTA V. 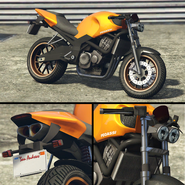 The Ruffian on the updated Rockstar Games Social Club.

The Ruffian in the cinematic preview on the Grand Theft Auto V Rockstar Games Social Club.

The Ruffian in the cinematic preview on the Grand Theft Auto Online Rockstar Games Social Club.