The Rubble shares the same cab design as the Phantom, which is based on a Peterbilt 359 EXHD, specifically the dump truck configuration. While most of its traits is shared with that of its semi truck equivalent, the Rubble features two sets of front-facing marking lights near the side filters, which are not present on the Phantom.

The Rubble always spawns with a rusted bodywork and is operated by Skiver Construction Corporation. The tipper on the rear features numerous marking lights, as well as vertical tail lights. It may appear either filled with material or empty.

Players can climb onto the cab and ride on it without the risk of falling off/out.

The truck is very heavy, having the Cargobob struggle to hold it, and, because of the sheer size of it, when traveling around sharp corners, it will tend to tip over. In general, a lot of its performance aspects are carried over from the Phantom, although the top speed is seemingly lower and due to the heavier weight, the vehicle struggles to corner without resistance. The heavy weight also means it matches other large trucks in the ability to ram other vehicles off the road with relative ease, and durability is extremely high.

Despite the cab being based directly on the Phantom, the engine model is shared with the Scrap Truck, being a front mounted turbocharged, twin-cam, four cylinder engine. Despite this, the engine sound remains the same as the Phantoms. This engine is mounted in a front-engine, rear wheel drive layout. 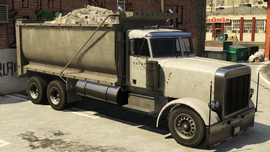 A Rubble in GTA V, with its tipper loaded. (Rear quarter view) 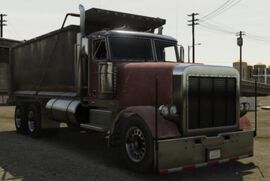 A Rubble in GTA V.

The Rubble on the Rockstar Games Social Club.

Retrieved from "https://gta.fandom.com/wiki/Rubble?oldid=1208149"
Community content is available under CC-BY-SA unless otherwise noted.