US-1
near Lago Zancudo

Route 68 is an east-west rural numbered highway in the state of San Andreas and appears in Grand Theft Auto V. The highway passes through rural desert areas of the state and the small town of Harmony. Route 68 also acts as the border between Los Santos County and Blaine County.

The random event of the Groom in Trouble can be found on this road.

The Route 68 Store in Harmony, referencing souvenir stores that popped up along Route 66 in the real world. 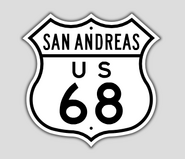 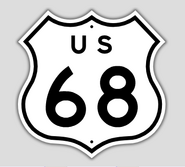 A 1957-present style US Route 68 shield.
Add a photo to this gallery

Retrieved from "https://gta.fandom.com/wiki/Route_68?oldid=1208449"
Community content is available under CC-BY-SA unless otherwise noted.