I-1
in Tataviam Mountains

US-13
in Grand Senora Desert

Route 15 Begins at the Four Level Interchange based intersection in Murrieta Heights where it is cosigned with Interstate 4 as the Olympic Freeway transitions to the Palomino Freeway. Route 15 heads in a northeastern direction and the freeway narrows to a four lane divided freeway flanked on opposite sides by the Tataviam Mountains to the north and the Palomino Highlands to the south. Its first intersection is a T-shaped cloverleaf with Sustancia Road. Immediately after this junction, Interstate 4 losses its concurrency with Route 15. The median widens as well to accommodate a large rest area which houses an Ammu-Nation and a RON gas station with a 24/7 and Bishop's Chicken. The highway curves along the eastern footing of the Tataviam Mountains for most of its routing. Route 15's second and final intersection is another T-shaped cloverleaf with Senora Way. The route continues in a northwest direction as it and Interstate 4 merge end and merge into North Interstate 1 and Route 13, forming the Senora Freeway. The intersection with the two other routes mark the end of Interstate 4/Route 15 and the Palomino Freeway.

The overhead sign for Route 15 North at the Four Level Interchange.

Route 15 as it nears the rest area.

Looking along Route 15 as it nears the intersection with Senora Way and the Senora Desert. 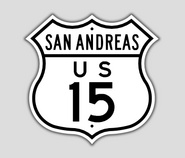