This article is for the numbered "U.S. Route". For the Interstate, see Interstate 1.

SA-18
in Pacific Bluffs
US-68
in Tongva Hills

Route 1, also known as the Great Ocean Highway (GOH) or the Western Highway, is a rural numbered highway in San Andreas. Route 1 travels along the western and northern coastlines of San Andreas. The route covers the entire Great Ocean Highway, from its southern terminus in Del Perro to Dignity Village. It then becomes the Senora Freeway as it travels through Braddock Pass, before becoming Route 13 in Grapeseed. It is one of the longest roads in San Andreas as it encircles half of the state.

From the south, Route 1 begins in the tunnel at the western end of the Interstate 2. Once leaving the tunnel, the six lane Del Perro Freeway travels northwest along the edge of Del Perro Beach. Even as a freeway, beachfront property still lines the side of the road. The Del Perro Freeway ends near Pacific Bluffs (and a possible Route 18 west end) and begins to narrow down until the south end of Ineseno Road, where it turns north and becomes a divided two lane highway. It then runs through Chumash and along the west edge of the Tongva Hills where it eventually meets the western terminus of Route 68.

It then crosses the Lago Zancudo bridge, and passes under Fort Zancudo through a tunnel, emerging into North Chumash. Near Raton Canyon, it creates an S-curve before driving over another bridge and traveling in a northeastern direction. It passes along the western edge of the Chiliad Mountain State Wilderness preserve, and into the town of Paleto Bay.

As it leaves the city, it turns east and travels along Procopio Beach, where it passes the Dignity Village and becomes the Senora Freeway. As a four-lane freeway, it turns south along Braddock Pass. Southbound traffic flows through the Braddock Tunnel, as it makes its way into Grapeseed. The freeway becomes Route 13 a few hundred feet from the intersection of Union Road.

All locations are based on map on the GTA V Manual app.

The missigned overhead sign displaying US Route 23 South when it is really US Route 1 South.

Aerial shot of Route 1. The Braddock Tunnel can be seen.

The rail bridge over Route 1 at Braddock Pass.

Route 1 as it runs through Paleto Bay.

Route 1 as it winds through Paleto Forest.

A curve along Route 1 showing the cliffs and one of the tight corners.

The large rock formation along Route 1 which is based on Point Mugu Rock in Malibu.

The long bridge that carries Route 1 over Lago Zancudo.

The intersection of Route 1 and the western end of Route 68.

A sign that incorrectly labels Route 1 as Interstate 1 even though the latter is half way across the state. This sign is one of two that displays this missignage. The other sign is directly across the bridge along the guardrail. 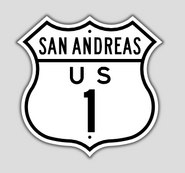 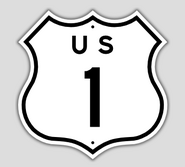 A 1957-present California style US Route 1 Shield.
Add a photo to this gallery

Retrieved from "https://gta.fandom.com/wiki/Route_1?oldid=1310021"
Community content is available under CC-BY-SA unless otherwise noted.