GTA Wiki
Register
Don't have an account?
Sign In
Advertisement
in: Pages with unsourced statements, Landmarks, Locations,
and 9 more
English

The building takes up an entire block, bordered by Garnet Street to the south, Hematite Street to the north, Denver-Exeter Avenue to the east and Frankfort Avenue to the west. It is marked on the official Manual Liberty City Area Map as a Point of Interest and is colored beige on the map.

The Rotterdam Tower is the tallest building in Liberty City, almost twice the height as the fourth tallest building, the South Parkway Building, and significantly taller than the second and third highest, the Zirconium Building and the Bawsaq Building.

Due to the height of the building, the observatory is useless for sniping, as pedestrians and vehicles will not spawn on the ground while the player is at that height. The observatory is safe from the police, as police officers cannot utilize the building entrance. There are no other vectors of escape, so the Tower is an inadvisable destination if it lies within the wanted search radius.

The nearest subway stop is Suffolk LTA on the K/C Algonquin Inner Line, in on the border of The Triangle and in the neighboring district of Suffolk. The surface exits emerge outside the southern face of the Tower. Go north-east to the entrance and eastern face of the Tower. A dangerous alternative means of accessing the observation deck (or higher) is to take a helicopter and bail out at the top.

One Helitour pilot mentions that his brother attempted to BASE jump from the 82nd floor, but was stopped by security guards who "were tubby, but they sure could move!" These security guards seem to be absent from the observatory, however.

The Rotterdam Tower was built in 1931, just like its real life counterpart. It stood as the tallest building in Liberty City just after another tall skyscraper, the Zirconium Building was built a few blocks away. The Rotterdam Tower was the tallest building in the world, but was overcome by other unnamed skyscrapers in other cities. The building's name is a reference to New Rotterdam, the Dutch colonial town which became the present day Liberty City.[citation/verification needed]

Exclusive to The Ballad of Gay Tony, the building undergoes several major improvements and changes, affecting both the functionality of the tower and the exterior design. Perhaps the most notable of which is the implementation of a fully accessible lobby interior. The exterior door textures are replaced with accessible doors leading into a detailed lobby interior based directly on that of the real-life Empire State Building's entrance lobby. The lobby features ceramic textures, large pillars, several paintings and relief displays naming several Grand Theft Auto cities; Liberty City, Vice City, Los Santos and San Fierro. It also features non-functional elevators. The original observatory deck teleporter located just outside the doors remains in place, and takes the player to a redesigned upper floor deck.

The new observatory deck now presents a set of stairs which take the player to the upper pylon. These changes see the removal of several satellite changes, at the expensive of other details on the pylon on spire, including an interactive ladder, a new framework holding the ladder in place, and new signage. A large neon sign, facing north displays "Rotterdam Tower: Top of the World", which is easily visible from Star Junction. A parachute is located on the top of the first ladder. There has also been the removal of the two ladders on the eastern and western faces of the building, which in GTA IV allowed players to descend to the immediate setback below.

The changes to the upper deck are prominently featured during "High Dive" and were likely made for this particular instance.

Night lighting at the top of the building is changed. As oppose to the original blue, white and red color scheme present at night, TBoGT replaces them with bright purple and red colors, albeit only visible at certain distances (see Bugs/Glitches).

These edits are only present in The Ballad of Gay Tony and do not affect The Lost and Damned.

In Grand Theft Auto: Chinatown Wars, only the lower level exterior walls are visible due to the "top down" perspective. However, the entire building appears in the background when talking with the drug dealer in Happiness Island.

The building is named after the city of Rotterdam in the Netherlands.

Corner of the building.

Upper floors of the building during day-time.

The rooftop and base of the pylon and spire.

Side view of the building.

Looking up the skyscraper.

Elevators on the north side. Designated for the observatory and tenants.

Elevators on the south side. Designated for the observaory and offices.

A sign that's designating Rotterdam Tower as a historic landmark.

Close-up on the lobby relief. 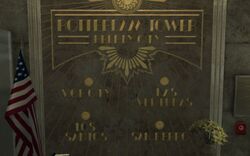 Detail of the cities engraved on the lobby relief. 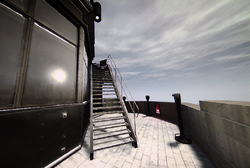 The staircase on the 82nd floor observatory in TBoGT. 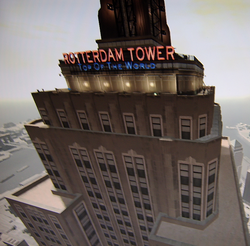 The new neon sign on the 82nd floor observatory in TBoGT. 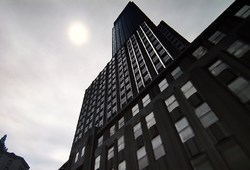 Looking up at the skyscraper in TBoGT.

The entrance of the building in Grand Theft Auto: Chinatown Wars.