6 (driver, three cabin passengers and two hanging on the sides)

“They don't make them like they used to, which is a good thing because here at Albany we've completely run out of ideas. Lovingly remodelled, with room for a new suite of personal modifications, the latest edition of our classic Roosevelt represents a new height of criminal refinement, taking you back to the golden age of fraud, racketeering and murder when all you had to worry about were a few charges of tax evasion.”
— Legendary Motorsport description.

The Albany Roosevelt Valor is a classic limousine featured in Grand Theft Auto Online as part of the Be My Valentine update.

The Roosevelt Valor is a heavily customizable variant of the Roosevelt, retaining the classic 1920s design and the distinctive features from the base model. However, the car has modern spare wheel coverings with chrome circular mirrors on top, as well as whitewall tires. The metal mesh covers are absent, but can be added back via customization. The car also retains the same brown leather interior with the same brass dials over a wooden backing.

Color distribution is similar to the Roosevelt, having the primary color applied on the front chassis frames, bodywork and window surroundings, and the secondary colour applied on the side arches, stepsides, cabin, rear luggage rack and the thin stripes passing through the sides and going towards the rear. Although not accessible, a tertiary color is also available for the roof panel, which is always set to black on purchased examples. The vehicle shares the same wire rim design as the regular Roosevelt, though assigned with a dedicated wheel color instead of the primary one.

Performance-wise, the Roosevelt Valor performs identical to the regular version, having a relatively good top speed and durability, but below average acceleration and high chances of spinning out due to the archaic suspension. Like the regular Roosevelt, as well as the Granger and its law enforcement variants, two passengers can hang on the sides, allowing them to use assault rifles and light machine guns for drive-bys.

Like the standard Roosevelt, the Roosevelt Valor is powered by the same massive V12 engine with 6 double-barrel downdraft carburetors, coupled to a 4-speed transmission in a RWD layout. It is possible to add either a bug catcher or a set of ram intake pipes. The power of the piston revolutions causes the engine to shake slightly, much like its cousin, the Fränken Stange.

Installing a "Rear Spare Wheel" modification will increase its traction slightly, in the same way as a spoiler. 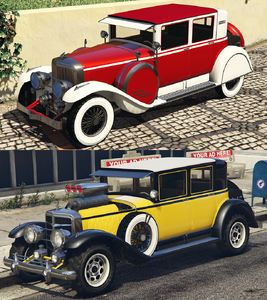 Possible combinations of modifications that can be given to the Roosevelt Valor in Los Santos Customs, in GTA Online (rear quarter view)

The Roosevelt Valor on the updated Rockstar Games Social Club.

The Roosevelt Valor seen in a promotional screenshot. 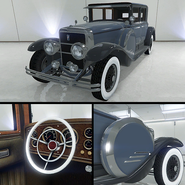 The Roosevelt Valor on Legendary Motorsport.