"Party like it's the Prohibition era in this armored 1920s limousine. Perfect for a gangster and his moll on their first date or their last. Let the Valentine's Day massacres commence."
―Legendary Motorsport description.

The Albany Roosevelt is a classic limousine featured in Grand Theft Auto V and Grand Theft Auto Online as part of the Valentine's Day Massacre Special update. It was initially made available in GTA Online as a time-restricted vehicle from February 13 to March 3, 2014, and later re-released indefinitely.

It is based on the custom 1928 Cadillac 341A Town Sedan owned by the infamous mobster Al Capone, along with elements from the Cadillac 341B. Its grille and headlights (including its metal mesh covers) are based from certain Bentley car models from the same period, particularly the 1927 Bentley Speed Six. The Newswire states that, similar to the real car, the Roosevelt is armored. The front grille sports the Albany logo and protects the radiator. There are four Drum headlights closely installed together in front of the grille. Two are large main beams with metal mesh covers, the other two are smaller fog lamps. In addition, two spotlights are mounted where mirrors would normally be. They are usable with the secondary headlight option. The hood has a chrome, cross-shaped trim and opens to reveal a carbureted V12 engine coupled to a 5-speed transmission.

Interior wise, it is unique, well detailed and appropriate for its era. It has two classically upholstered bench seats. The dashboard has multiple brass dials, but seems to mistakenly have a steering wheel that would match to a car from the 1950s and 1960s. There are two spare wheels located on either side of the vehicle that are preserved in leather cases that are held with a pair of straps. Behind those are four small containers situated under the doors. There is a black luggage bag located at the rear instead of a regular trunk, which cannot be opened.

The Roosevelt drives smoothly. It is quite heavy, possibly owing to its thick armor. It is powered by a massive 6-double barrel downdraft carburetor, single-cam V12 engine, which is capable of powering the vehicle up to relatively high speeds, although acceleration is not as good. With its archaic suspension, spinning out is very likely at higher speeds, and oversteer may become an issue. Lowering the suspension may help prevent this since it will reduce body roll. It is quite durable and proves capable when off-roading. Its acceleration may suffer with more passengers.

Like the Granger (and its law enforcement variants), players can ride on the sides of the vehicle, standing on the running boards. While doing so, they are able to use assault rifles and MGs, which are not normally available for use in any vehicle other than helicopters. However, as like any vehicle of this type, passengers hanging from the outside will fall off from harder collisions, scraping against surfaces or impacts from large heights.

A Roosevelt in the original version of GTA V. (Rear quarter view).

A trunkless Roosevelt, commonly appearing in the enhanced version.

The Roosevelt as seen in a pre-release screenshot.

The Roosevelt spawn point at Backlot City in the enhanced version.

The Roosevelt spawn point at 2848 Milton Road in the enhanced version. 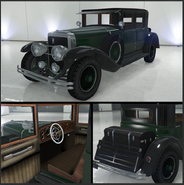 The Roosevelt on Legendary Motorsport.

Retrieved from "https://gta.fandom.com/wiki/Roosevelt?oldid=1185953"
Community content is available under CC-BY-SA unless otherwise noted.