View source
watch 02:46
The Quarry - The Loop
Do you like this video?
Play Sound
For the petroleum company, see RON. For the mission, see Nervous Ron.

Michael: "So what's your story?"
Ron: "I ain't got a story. I'm an independent thinker. Living out here, away from the man."
―Ron Jakowski to Michael De Santa in Derailed.

Ronald Jakowski was possibly born in the Midwestern United States and previously worked as an accountant. He was happily married for 12 years before his "best friend", Trevor Philips, entered his life. Trevor convinced him that his wife was only holding him back in life and scared her when he threatened dismemberment. Ron was kicked out by his wife and they divorced, with Ron deep in debt due to still paying settlement fees to her. He then began to obsess over conspiracy theories and began working for Trevor as CEO of Trevor Philips Enterprises. On his radio show, Ron mentions that he is working with drone-jamming technology.

Ron is first seen with Trevor when he meets the GTA Online Protagonist. He then gives the Player missions for Trevor, occasionally calling to remind the Player about Crate Drops.

He is later seen helping Trevor in Series A Funding often being the person the Crew meets at the end of each setup mission. He also provides information to the crew through Earpieces during some of the missions. He is then seen briefly in the Finale, informing the Crew of the Gangs incoming attack on Trevor.

Ron is first seen trying to calm down Johnny Klebitz while he is angrily heading towards Trevor's trailer. However, the efforts of Ron and Wade Hebert could not prevent Trevor from murdering Johnny.

The three men get into Trevor's Bodhi to drive towards The Lost MC's location in Grapeseed. Once there, they confront and threaten Terry Thorpe and Clay Simons. This causes the two bikers to ride back to Stab City to warn the other Lost members, but Trevor kills them en route.

Eventually, the trio arrive at The Range, the Lost's headquarters. Ron and Wade wait in Trevor's truck while Trevor kills the bikers. After the bikers are killed, Ron and Trevor drive towards Ortega's trailer. Trevor rams Ortega's trailer into the river, before either killing or sparing Ortega.

A few days later, some members of The Lost ransack Trevor's Trailer in retaliation for Johnny's murder. Following this, Trevor decides to wipe out The Lost's presence in Blaine County. Ron assists him in taking over the Sandy Shores Airfield. Trevor orders Ron to sneak into the airfield while Trevor provides cover as a lookout in a water tower. After Trevor "buys" a Sniper Rifle, Ron takes his Blazer and sneaks into the airfield undetected, thanks to Trevor's sniping. Ron places explosives on the gas tank and it explodes. The duo flies off in two airplanes and deliver the guns to their Mexican contact, before landing at McKenzie Field.

After Wade discovers Michael Townley's whereabouts in Los Santos, Trevor puts Ron in temporary charge of Trevor Philips Enterprises while he and Wade are in Los Santos. Ron remains in Sandy Shores and runs the business during Trevor's absence. While Trevor is in Los Santos, Ron occasionally contacts Trevor asking for advice and to inform Trevor that some Chinese men have been surveying Trevor's trailer and his meth lab. Trevor can also call Ron on occasion to ask him about the business.

After working with Martin Madrazo, kidnapping his wife and being exiled from Los Santos, Trevor finally returns to Sandy Shores with Michael and he starts working with Ron again. While Trevor was away, Ron says that he has been monitoring chatter and tapping into Merryweather networks to collect information about them. Trevor uses this information to "intercept" a Merryweather weapons plane and later derailing a Merryweather train carrying precious goods. Ron also interacts with Michael for the first time during his stay in Sandy Shores, when they can be seen discussing Ron's paranoia in one switch scene, and the player can speak to Ron while controlling Michael using the interact button, although Ron will respond by insulting Michael.

After Trevor returns to Los Santos, Ron is only heard again in two missions. The first is in Bury the Hatchet if the player starts the mission using Trevor, where Trevor asks Ron to prepare a plane for him to go to North Yankton. The other depends on the player's choice at the end of the game.

Ron sends a text message to Trevor informing him that he has left a gift to him by his trailer. During the mission The Third Way, if the player switches to Trevor while the protagonists are driving towards their targets, Trevor will call Ron to inform him that Trevor Philips Enterprises' future looks good, since they have more money coming in and that the "Chinese problem" will soon be taken care of. Ron appears optimistic after hearing this.

During and after the storyline, Ron can often be found outside Trevor's trailer, spouting random conspiracy theories or training his aim by shooting tin cans. He can also be found inside the trailer listening to a radio through headphones. If the player interacts with Ron as Trevor, he will insult Ron for how "useless" he is with Ron apologizing as a response. If the player interacts with Ron as Michael, he will call him "Trevor's weird friend" and creepy, but Ron does not respond. Franklin is the only protagonist who cannot interact with Ron because they did not meet each other in the storyline.

Ron Jakowski: "Oh, you're my new part-ner... you bought into the place. You're late, what kept you?"
GTA Online Protagonist: "... (interrupted)"
Ron Jakowski: "Yeah, well it's too late. That bastard Tre... uh, my best friend... he's supposed to protect me forever... then he goes all Vinewood on me... he's too important for Ron now... he's a guru... he's a life style coach... I don't know what he is... I bet he's got abs..."
—Ron Jakowski meeting the GTA Online Protagonist after they purchase the Hangar.

In 2017, Ron returns in the Smuggler's Run update, where he secures a partnership with the GTA Online Protagonist in the contraband smuggling business, in which he gets a 3% cut in the goods smuggled by the player. Once the protagonist purchases a hangar, he is seen trying to dispose the bodies of two agents. When introducing the hangar, he makes a passing reference to Trevor having "gone Vinewood on him" and will refer to him indirectly as his "old boss".

A new episode of the Blaine County Radio Community Hour podcast is broadcast by Blaine County Talk Radio, featuring various references to events during Grand Theft Auto V's timeline, Grand Theft Auto itself and events such as snow in Los Santos during Christmas events and switching characters, and a monologue indirectly referencing the fact that the GTA Online's timeline is now advancing in real-life timing. It also stars a guest, a right-wing activist named Sophia Bowles-Carmichael. Eventually, Ron discovers that Sophia merely came onto the show to seduce him as she hadn't been with a man in a decade. She attempts to bang on the doors of Ron's rooms to let her back in, but Ron rejects this.

Rockstar describes Ron by saying "if his best buddy Trevor Philips is like a shark, Ron is like a remora", who is "paranoid but terrified" of Trevor.

Ron describes himself as a "independent thinker" who lives in Sandy Shores to be "away from the man". This has resulted in Ron becoming very paranoid, constantly worrying about government surveillance, such as wiretapping cellphones, or various other conspiracies. This can be seen multiple times during the storyline, like when he claims that the military or FIB sent a drone to spy on him and Trevor due to their arms dealing or when he is found outside Trevor's Trailer using a device to locate alien frequencies.

He is an unlikely friend of Trevor but as said above, he is terrified of him and so goes to great lengths to appease him whenever he can, such as when he let Trevor bully him into giving up his share of the profits of an arms dealing job the two carried out, especially if Trevor is close to losing his very short temper. Trevor describes Ron as a "conspiracy theorist", which fits with his paranoia. Despite Ron's timidness, he acts as a sort of henchman for Trevor and helps him with missions such as sneaking around the Lost MC's base to plant explosives while Trevor watches and covers him through a sniper scope, which indicates a level of trust between them, and when Trevor introduces Ron to Michael, he describes Ron as "very loyal" and "dependable".

Due to trying to appease Trevor whenever he can, Ron will always agree with Trevor even when the latter insults him or his conspiracy theories, making him something of a "yes man". Despite his fear, he seems to genuinely look up to Trevor, even with Trevor often threatening him with violence. This concern can be seen in the mission Derailed, where Ron admits to Michael that Trevor is indeed a "bad person", but he does have a "sensitive side". Ron's undying loyalty to Trevor is also shown in a text at the end of Something Sensible, where he curses Michael for killing Trevor.

Despite his loyalty to Trevor, it's clear that Trevor is a toxic influence on Ron. Trevor's regular threats of violence against Ron have had negative effects on Ron's life (Trevor was the reason Ron's wife divorced him after he threatened to dismember her), and his fear of what will happen should Trevor follow through on his threats causes him to agree with whatever he's planning in order to appease him, leading him to develop Stockholm Syndrome to a degree. This is exemplified during Smuggler's Run when Ron, fearful that the GTA Online Protagonist might become hostile should he screw up, begs them not to hurt him.

Despite his timidness and meek personality, Ron has shown himself capable of murder without any prompt from Trevor, as the GTA Online Protagonist met Ron in a hangar after he just killed two agents. Ron also became a partner of another business and occasionally gave out missions that sometimes required killing other competitors to the smuggling operation, showing that Ron has become dangerous and ruthless in his own right due to Trevor's influence and his own paranoid personality.

Ron in the PC version of Grand Theft Auto V.

Ron without his hat and glasses. 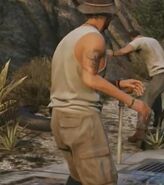 Beta Ron without his red shirt as seen in a second trailer. 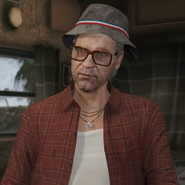 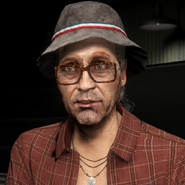 Ron, Chef and Trevor in the Series A Heist introduction in GTA Online: Heists. 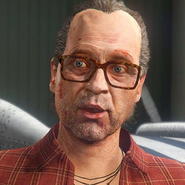 Ron Jakowski in 2017, during the events of GTA Online: Smuggler's Run. He keeps the same appearance as in the Heists update.