The design of the Romero's Hearse in Grand Theft Auto: Vice City is as expected for a vehicle tailored to transport the deceased, appearing as a black station wagon-like car with a rear compartment designed to carry a coffin. It resembles an '80s Buick Superior Hearse (in turn based on a 1977–1984 Buick Electra). The car may come with a coffin at the back (appearing with one of two or three different designs). This version also resembles kind of a station wagon version of the Cadillac Fleetwood Brougham.

In Grand Theft Auto: San Andreas, it resembles a late '70s Cadillac hearse, sporting a wider range of colors for the roof and body (although generally maintain dark tones). One of Carl Johnson's possible girlfriends, Katie Zhan, owns a white Romero, and will give Carl the keys to it if Carl gains her approval.

The Grand Theft Auto IV and V rendition of the Romero is a modified version of the Washington sedan, and as such, bears the Albany brand. However, the vehicle lacks a coffin, aside from one mission Undertaker. In GTA IV, the hearse has whitewall tires.

In GTA V, the Romero always spawns with a coffin in the rear and normal tires. 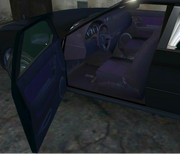 Romero Hearse's trunk with coffin in GTA V.
Add a photo to this gallery

The Romero's Hearse in Grand Theft Auto: Vice City is a car capable of high speeds, but suffers from poor steering due to its weight and long wheelbase. Performance of the Romero in Grand Theft Auto: San Andreas is even worse, as the car is only capable of mediocre top speeds, and features weak brakes, though it does have a good side, as its excellent grip on all surfaces, (except sand) combined with its low braking, allow it to brake and drift around corners a lot more easily than other cars. This ability significantly improves its bad turning, while retaining continous high speeds, thus making it a somewhat desirable car.

The performance of the Hearse in GTA Liberty City Stories is similar to the game's Perennial as both cars share the same body construction, thus possessing mediocre-to-average acceleration and top speed but responsive steering and braking.

All renditions of the hearse are only capable of carrying two occupants, despite featuring two back doors in most cases. The Grand Theft Auto: Vice City rendition is an exception, being capable of holding four occupants.

The Grand Theft Auto IV Romero retains the adequate handling of the Washington, but has inferior acceleration and top speed of 138 mph due to the added weight of the wagon body.

In Grand Theft Auto: Vice City, Romero's Hearse is only available in the mission "Two Bit Hit" but it can be spawned through cheats. In Grand Theft Auto: San Andreas, however, the Romero can be found outside missions, for example at the Blackfield Chapel in Las Venturas or at the Angel Pine Medical Center.

The Romero in Grand Theft Auto IV is only featured in the mission "Undertaker". It can be mostly found near the church located in Suffolk when the player is driving the car.

The Romero can be modified at the TransFenders.

Retrieved from "https://gta.fandom.com/wiki/Romero%27s_Hearse?oldid=829672"
Community content is available under CC-BY-SA unless otherwise noted.