For the sports car featured in Grand Theft Auto 2, see Romero.
“OK you subversive little renegade, how close to the edge are you prepared to get? Sure, you dyed your hair magenta, and that quote on your T-shirt is pretty darn nihilistic, and your opinions walk that dark and brooding line between too much truth and too much irony. But are you prepared to drive to school two feet from a decomposing corpse to prove your point?”
— Southern San Andreas Super Autos description.

The design of the Romero's Hearse in Grand Theft Auto: Vice City is as expected for a vehicle tailored to transport the deceased, appearing as a black station wagon-like car with a rear compartment designed to carry a coffin. It resembles an '80s Buick Superior Hearse (in turn based on a 1977–1984 Buick Electra), and appears to be kind of a station wagon version of the Cadillac Fleetwood Brougham. The car does not seem to be based on any particular model, loosely sharing cues from cars like the Regina and the Greenwood. The vehicle features a set of rear doors intended for the loading of the coffin on the back, as well as an extended roof and side decorations on the separations of the door windows and on the rear sections. The rear end has vertical tail lights in a similar way to the Perennial. The car may have a coffin at the back (appearing with one of two or three different designs), and may spawn in black or in four shades of grey.

In Grand Theft Auto: San Andreas, it resembles a late '70s Cadillac hearse, and the design leans more towards the Regina, but still has unique features to distinct it from other standard cars. The rear section is largely similar to the GTA Vice City rendition in terms of layout and features, but the rear wheels are partially covered by the bodywork and has smaller tail lights. Despite having rear door handles, the car lacks any sort ofopenable rear doors, as there are no gaps. It sports a wider range of colors for the body as primary and roof as secondary (although generally maintain dark tones).

The HD universe rendition of the Romero is built on the Washington chassis, and as such, bears the Albany brand. The front is evidently the same as the Washington's, sharing the same grille placements, headlights and the Albany ornament on the hood. The sides retain the chrome details passing through the doors, but the original plastic details from the Washington were replaced by chrome ones on the bottom sides and the greenhouse area, alomg with side lights on the rear quarters. As expected from a hearse, the Romero has an additional set of rear doors with curtain textures inside, an extended roof and the decorations around the back section. The rear end of the car features a single rear door that hinges from the driver side and is fitted with curtain textures inside, as well as a set of red lights on the outer edges and white vertical lights on the bumper, beside the license plate. The vehicle has a unique dark purple interior.

Unlike former renditions, the vehicle no longer spawns with a coffin on the back (aside from the mission Undertaker, which is an actual prop rather than an extra), and only spawns in black. The Romero shares the same rims of the Washington, but has whitewall tires.

The Romero reappears unchanged in Grand Theft Auto V and Grand Theft Auto Online, though the cross decorations were removed. While it seems to retain the rear doors, they are actually part of the bodywork, therefore uninteractive in any way.

In the original versions of the game, the Romero retained the dark purple color. In the enhanced version, however, the interior is black like many other vehicles. The rear of the vehicle remains purple, however.

Unlike in GTA IV, the Romero will spawn either with an empty back, a coffin or a coffin with wreaths. The vehicle is only available in a single body color, though the color of the stitching matches with the body. It retains the same wheel design as the Washington, although it lack the whitewall details on the tires.

The Romero's Hearse in Grand Theft Auto: Vice City is a car capable of high speeds, but suffers from poor steering due to its weight and long wheelbase.

In Grand Theft Auto: San Andreas, the vehicle is almost an amalgamation of all the least desirable characteristics in a car. Its engine is weak, with poor acceleration, low top speed, and low durability. Its suspension is soft and very low, sometimes leading to the chassis scraping the ground from a fall (This problem can be fixed by modifying it with Hydraulics at any Transfender shop, and locking the hydraulics on 'High' mode). Its brakes are weak, and its wheels do not lock up when braking.

All renditions of the hearse are only capable of carrying two occupants, despite featuring two back doors in most cases. The Grand Theft Auto: Vice City rendition is an exception, being capable of holding four occupants.

The Romero retains the adequate handling of the Washington, but has inferior acceleration and top speed due to the added weight of the wagon body. Suspension is average on the front, but rather low on the rear because of the extra weight, which causes certain difficulty on curbs or bumpy terrain when reversing the vehicle.

Like the Washington, the Romero is powered by a single-cam V8 engine, coupled to a 5-speed gearbox in a front engine, rear wheel drive layout. The engine appears to have four small pipes on the vehicle's passenger side, but only three on the vehicle's driver side (with the fourth one seemingly hidden within the engine bay texture). The engine sound is shared with the Washington and other luxury cars, being low-revving and smooth.

The Romero Hearse retains some of its handling elements from its appearance in GTA IV. However, its top speed has been improved. Once close to or at its top speed, the Romero Hearse can gain enough momentum to push through obstacles and roadblocks relatively easy. The vehicle's performance still remains below average but acceptable for its size and purpose.

Again, the car is powered by a single-cam V8 engine, coupled to a 5-speed gearbox in a front engine, rear wheel drive layout. Its engine sound is generally mid-revving and smooth, similar to the one on the Primo.

The Romero can be modified at the TransFenders. 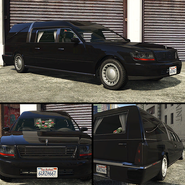 The Romero on the updated Rockstar Games Social Club.

The Romero in the cinematic preview on the Grand Theft Auto V Rockstar Games Social Club.

The Romero in the cinematic preview on the Grand Theft Auto Online Rockstar Games Social Club.

The Romero is one of the rarest vehicles in the game, being limited to a single appearance in the game: