“Hi there. This ain't strictly business, but it'll keep Trevor happy, and that's good for everyone, right? Now, he wants one of those Lost MC vans - something to do with his friend Ashley, and making it rock to torment her fella... I don't know. Can you take one and bring it to the trailer. R. Jakowski.”
— Description

Romance Isn't Dead is a mission in Grand Theft Auto Online given to the player by Ron Jakowski. It is available for up to four players, and is the first available mission after the rank Hustler is achieved.

This mission happens a few months before the events of Grand Theft Auto V, and explains the breakdown of the business relationship between The Lost MC and Trevor Philips. The mission starts when Ron calls the player, telling them that Trevor is angry at the player for interfering with his business. Ron mentions that Trevor wants to acquire a Lost MC van because it has "something to do" with Ashley and "tormenting her fella". When the player arrives at Trevor's Trailer, Trevor angrily orders the player to steal a Lost MC van from The Range in Stab City. There are three possible vans that the player can steal, but only one is required. When the player reaches the Range, some heavily-armed Lost MC members will be protecting the vans, and the player(s) must take them out. When the player acquires a van, some more Lost members will chase the player back to Sandy Shores. The mission is completed when the player parks the van in Trevor's trailer garage.

Taking out members of the Lost MC.

Engaging with members of the Lost MC at the Range.

Leaving Stab City with the vans.

Arriving at Trevor's trailer with the vans. 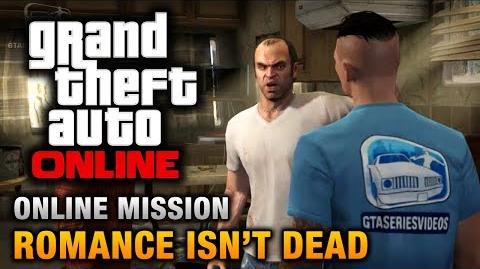