The Bellic cousins discover their apartment on fire.

Roman: "Jesus! It's on fire, fuck! I've got nothing left. Not my home, not my business, nothing. They took it all."
Niko: "I'm sorry, Roman, I'm really sorry but we have to go. We'll meet Mallorie in Bohan. You still have her."
―Roman in despair after watching his cab depot going up in flames.

Roman's Sorrow is a mission for Niko's cousin Roman in Grand Theft Auto IV. This is the mission where Roman and Niko move from Broker to South Bohan. It's also a major turning point in the storyline.

After a botched meeting before with Dimitri and Ray Bulgarin, Niko can call Roman to start this mission. In the call, Roman will be whispering and will ask Niko to meet him in an alleyway in East Island City.

Roman will be stuck inside the trunk of his taxi, he is aware that Dimitri wants both he and Niko dead and is very angry at Niko for putting them in this situation. Roman suggests laying low for a while, he will call Mallorie to see if she has anywhere for them to stay, but not before asking Niko to head back to his apartment to collect all their stuff, including an special item he wants to show Niko.

Along the way to the apartment, Roman describes to Niko a dream he had last night. In the dream, he and Mallorie were married and they both had a tavern, he mentions that Niko also had found a girl in the dream.

Upon arrival at the apartment, they find out its has been set on fire, Roman despairingly wants to enter the apartment to pick up something, but Niko says its all gone. They decide to go Roman's cab business instead.

Roman gets furious at Niko after discovering what happened to his apartment, he rants about how he had nothing when he arrived in Liberty City and had to build everything from the ground and how everything was going well before Niko arrived.

At the cab depot, they discover that the place was also destroyed in a fire, Roman gets depressed upon realising he has nothing left. Niko suggests meeting Mallorie in Bohan and tries to cheer Roman saying he still have her.

The Beginning of a New Life

Along the way to Bohan, Niko and Roman talk about many things: Roman rants again about how hard it was to build his life in Liberty City. Niko has nostalgic memories about an incident involving a bottle of vodka back in their home country. Mallorie calls Roman again and almost catch him crying and Roman reveals that the special item he wanted to show Niko in his apartment was a wedding ring he was planning to give to Mallorie.

They arrive in their new apartment in Bohan and after a brief meeting with Mallorie, in which she asks Niko to meet her in the community center where she works, they decide to part their ways.

"Following the massive rise in shootings recently in eastern Broker, police warned of a new danger lurking for residents - arson. Two buildings including a taxi garage were recently gutted by fire. Although two men were seen starting the fire with Molotov cocktails, no arrests have been made. We will stay with this story if we can find something interesting to say. In the meantime, be very suspicious of anyone buying vodka, matches and a gas soaked rag, but try not to panic. Local police were appealing for calm and also lots of snitches and widespread anxiety."

"Following the recent spate of shootings in Hove Beach and Firefly Island, there was a new danger lurking for Broker residents: Arson. Two fires were started in the Hove Beach area. One in an apartment and another in a taxi garage. Fire chiefs are suggesting both were arson. When asked why they said people saw two guys throwing Molotov cocktails in." 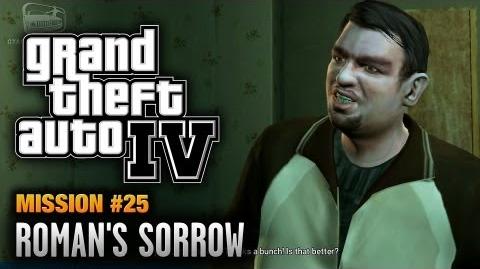 Niko finds Roman trapped in the trunk of his own taxi.

Niko composes himself in the Bohan safehouse while Roman looks at the brighter side of things (despite losing his home and business moments ago).