GTA Wiki
Register
Don't have an account?
Sign In
Advertisement
in: Missions, Missions in The Lost and Damned
English

In-game time
“Somebody looking for a fat Slav with a bladder problem?”
— Johnny Klebitz, jokingly, to Roman's Kidnapper

Roman's Holiday is a mission in The Lost and Damned, given to protagonist Johnny Klebitz by his ex-girlfriend Ashley Butler via a phone call.

Ashley phones Johnny to inform him that she is in trouble, and Johnny makes his way to her apartment. When he arrives, two of Dimitri Rascalov's men are there. They inform Johnny that Ashley has failed to repay a debt to Dimitri. A reluctant Johnny is then ordered to kidnap Roman Bellic and take him to a warehouse in Bohan, or else Ashley will be killed. Johnny, after scolding Ashley, leaves the apartment.

Johnny calls Malc and asks for his assistance in kidnapping Roman. Malc agrees and informs Johnny that he is in Northwood. Johnny arrives in Northwood and drives Malc's car to the "hardware store" on Dillon Street in Schottler, where Roman is gambling. Johnny and Malc arrive at the hardware store, where they kidnap Roman, gag him and put him in the back seat of the car. Johnny drives to the warehouse in Bohan, but Roman attempts to escape when Johnny stops at a tollbooth. Johnny apprehends Roman and orders him back into the car at gunpoint, where Malc secures Roman by putting the seatbelt across him. Johnny eventually arrives at the warehouse on Lompoc Avenue and hands Roman over to Dimitri's men.

Alternatively, Johnny calls the Bellic Enterprises company's phone number "555-2222" which he receives in a message from Elizabeta Torres at the end of the mission, Heavy Toll. Roman personally drives his cab to Johnny and Malc's location after being tricked into thinking that he would be giving his services to a couple of college girls. Malc kidnaps Roman and forces him back into his cab while Johnny drives the cab to the warehouse in Bohan. They later hand Roman over to Dimitri's men. 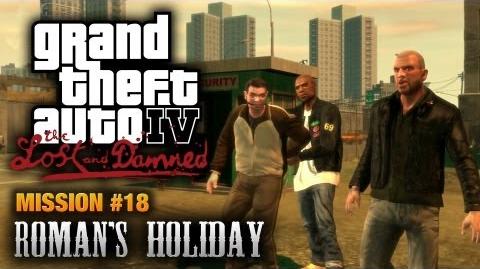 Connection with the GTA IV story

Johnny, Roman and Malc as seen in a trailer showcasing this mission.

Roman, as seen trying to escape from Johnny and Malc.