"To the casual observer, the Rogue looks like a classic, single-prop training aircraft. And that's exactly what you want them to think. Because with room for machine guns, missiles, anti-intercept countermeasures and a full-size bomb bay, you'll have those casual observers to puddles of speechless blood and piles of stupefied bones all day long. School's out.
Please note: This aircraft is excluded from Pegasus Lifestyle Management and must be stored in a personal hangar."
―Warstock Cache & Carry description.

The Western Company Rogue is a trainer attack plane featured in Grand Theft Auto Online as part of the Smuggler's Run update.

The vehicle is considered a trainer aircraft by default, but the player can essentially re-purpose it as a counter-insurgency/attack plane, as it features four weapon hard-points on its wings (two per side). Judging by the star emblem on the rear section, it is clearly affiliated with the Military.

The Rogue is a relatively simple aircraft to fly, as it has a high top speed of approximately 200 knots, while flying above 900 feet, and average acceleration. The Rogue's handling is responsive but with extremely powerful rudders, making yaw inputs extremely sensitive. The aircraft has a much longer take-off roll compared to other fighter aircraft, making take-offs with limited space a challenge. While flying, it is very important to pull up the landing gear since it causes it to lose a significant amount of maneuverability, airspeed and will be pulled downwards towards the ground.

The Rogue with upgraded armor, is almost twice as resistant to bullet damage as airplanes without armor upgrades. It takes about eighteen Heavy Sniper rounds to completely destroy the aircraft. The Rogue can also withstand three direct hits from the Homing Launcher, however any explosive damage to the control surfaces of the aircraft will knock them off, potentially leaving the aircraft unable to maneuver. Countermeasures, however, can provide some protection against homing missiles to avoid this issue.

If a player sits in the co-pilot seat, the owner of the vehicle can toggle control of the bomb bay, but the co-pilot needs good coordination with the pilot to make this tactic as effective as possible.

Pre-release screenshot of the Smuggler's Run update, with a gray Rogue in the foreground. An Ultralight and Tula are found to the left, an Alpha Z-1 in the center and a V-65 Molotok and Havok are found to the right.

Official screenshot from the Smuggler's Run update, featuring two Rogues. The one in the foreground is performing carpet bombing.

Promotional screenshot of the Shrewsbury Logo Tee during GTA Online Bonuses Event, with a Rogue to the left of the GTA Online protagonist. 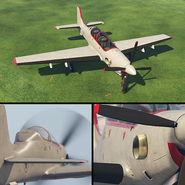 The Rogue on Warstock Cache & Carry.

The Rogue on Rockstar Games Social Club.
Add a photo to this gallery

Retrieved from "https://gta.fandom.com/wiki/Rogue_(plane)?oldid=1181470"
Community content is available under CC-BY-SA unless otherwise noted.