Located in La Puerta, Los Santos, directly northwest of the Maze Bank Arena, this large scrapyard can be accessed from Alta Street in the east and South Arsenal Street in the west. The facility is situated under Interstate 5.

The business buys and sells scrap metal and is presumably one of the main places in Los Santos where destroyed or decommissioned vehicles are sent. The center's telephone number is shown to be 555-0069. Attempting to call this number, however, will simply direct the player to a "number unavailable" tone. The company uses a fleet of Scrap Trucks, although they never spawn at the center. According to signage, the business was established in 1924.

The recycling plant is located northwest of the center and is the main setting of the mission The Long Stretch. While the building is accessed by the player during this mission, it will remain locked during the rest of the game, although it can be accessed in GTA Online when a gunrunning resupply mission may see the player enter to battle the Madrazo Cartel. Workers of the company can be seen occasionally outside the recycling center.

The scrap yard contains many automobile wrecks such as Peyotes, buses, trucks and even a rusted out tank. Used oil tanks, containers and wrecked machinery are also common finds here.

The Armenian Mob controls the area. They are mostly found in the eastern section of the scrap yard, and will not attack unless the player provokes them or attempts to steal one of their cars.

During a Gang Attack in GTA Online Merryweather mercenaries are seen in the yard.

The Madrazo Cartel also occupy the recycling plant at some point.

Between 07:00 am and 18:00 pm, a lowrider (Peyote, Tornado or Tornado Convertible) can be found parked outside the garages near the scrap yard entrance, or next to a building in the center of the scrap yard, close to the freeway. Other Peyotes, Tornados as well as Buccaneers and Mananas may be found parked near containers, within the second scrap yard shelter, and two near the rear side of the recycling center building, at any time of day.

A Box Trailer can be found parked north of the recycling center building at any time of day. 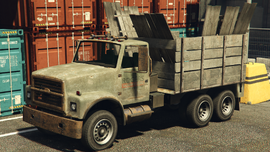 Aerial view of the site either side of the freeway.

The scrap yard as seen from Alta Street.

Entry door, accessible only during The Long Stretch.

Wrecked tank found near the entrance on Alta Street.

The fallen "S" from the sign at the top of the building.

Armenian Mob.
Add a photo to this gallery
Interior

Warehouse on fire during The Long Stretch.

Exit.
Add a photo to this gallery

Retrieved from "https://gta.fandom.com/wiki/Rogers_Salvage_%26_Scrap?oldid=1149051"
Community content is available under CC-BY-SA unless otherwise noted.