"The Rocoto won't win any races, but it makes up for it with luxuries that soothe the soul of upper middle class middle-aged angst."
―Southern San Andreas Super Autos description.

The Rocoto is a luxury crossover SUV which inherits the role previously slotted by the Rebla from Grand Theft Auto IV (as the Rebla is absent in GTA V). The car's design appears to be inspired by the German styling of both the first and second generation of the Porsche Cayenne, with a size similar to the Audi Q5 and Porsche Macan. The headlights and tail lights are found from those of a second generation Volkswagen Touareg, but the number of tail lights on the car seem to draw inspiration from the Mitsubishi Montero/Pajero/Shogun.

The Rocoto is a good alternative to the more popular SUVs in the game, the Dubsta and the Baller (second generation). It has a great balance between off-road and on-road performance. Like its real life counterparts, it has a powerful engine with high-speed transmission, it also features an AWD layout, which maximizes the potential for the vehicles terrain visits.

Compared to similar SUVs, such as the Baller, the ride is stiffer hence more responsive and can reach a higher top speed. On the other hand, acceleration is somewhat average and its braking is among the worst in its class. If you are looking for a sporty and uncommon SUV, this is a great option. On the downside, the ability to resist damage is poor, as after a few hard-on collisions, it's somewhat common for one of the front wheels to camber and jam into the fenders. 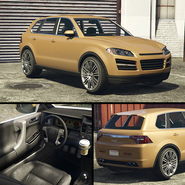 The Rocoto on the updated Rockstar Games Social Club.

The Rocoto in the cinematic preview on GTA V Rockstar Games Social Club.

The Rocoto in the cinematic preview on GTA Online Rockstar Games Social Club.

A dark red Rocoto can be found in the random event Car Robbery 2, where it is stolen and the player has the option to retrieve it to its owner. It features an array of cosmetic and performance modifications. 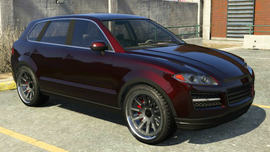 Retrieved from "https://gta.fandom.com/wiki/Rocoto?oldid=1296896"
Community content is available under CC-BY-SA unless otherwise noted.