Rockstar Games, Inc. is a development division of video game publisher Take-Two Interactive. The brand is most known for the Grand Theft Auto series. It is comprised of studios that have been acquired and renamed as well as others that have been created internally. While many of the studios that Take-Two has acquired have been merged into the Rockstar brand, several other recent ones have retained their previous identities and have become part of the company's 2K Games division.

The Rockstar Games label was founded in 1998 by Sam Houser, Terry Donovan, Dan Houser, Jamie King and Gary Foreman. Donovan has since left the company, to be replaced by former Capcom managing director, Gary Dale. Dale, along with Sam and Dan Houser is the leadership now.

Other companies that have developed for Rockstar Games

Rockstar Games are credited as executive producers of Sunday Driver and The Football Factory.

Rockstar's logo consists of a black 'R' and a white star on a yellow background. Rockstar Games has a habit of placing the logo within their games as a form of Easter Egg. 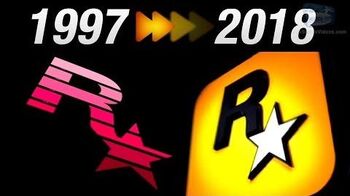