Rockford Plaza as seen from the northwest.

Despite of the name, the shopping mall is predominantly located in Burton. It sells mostly expensive clothing and jewellery. The plaza is listed on Grand Theft Auto V's Shopping & Glamour section of its website as one of the 3 places you can shop in. It also includes a parking lot that can be accessed from Occupation Avenue, Carcer Way and Hawick Avenue. Carcer Way (between San Vitus Boulevard and Las Lagunas Boulevard) goes through the plaza. The Ponsonbys is the only accesable store in the plaza. When switching to Michael, he can be seen dropping off Tracey or Jimmy at the Vinewood Bar & Grill.

In The Diamond Casino Heist, it is revealed that SecuroServ provides security services to the mall.

It is based on the real-life Beverly Center shopping mall in Beverly Hills.

These advertisements can be seen at the location of the mall:

Cluckin' Bell at the Rockford Plaza.

Croq-A-Hoop at the Rockford Plaza.

Les Bianco at the Rockford Plaza. 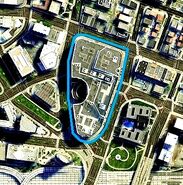 Rockford Plaza from Carcer Way
Add a photo to this gallery
Retrieved from "https://gta.fandom.com/wiki/Rockford_Plaza?oldid=1240647"
Community content is available under CC-BY-SA unless otherwise noted.