The building serves as the headquarters for the government of the Rockford Hills city within the greater Los Santos metropolis. Unlike the City Halls in Davis and Del Perro, there is no City of Los Santos coat of arms adorning this building indicating perhaps that Rockford Hills may not share the same political structure as the other two incorporated cities. The flag of the Republic of San Andreas can be seen flying alongside the American flag.

The building is implied to be of historical significance, and it is very ornate and elegant. The interior of the structure itself is inaccessible to the player in the game and plays no role in the storyline.

The building itself and the information given along with it bears a strong resemblance to the Beverly Hills City Hall.

A soapboxer can be found next to the fountain at the front entrance. 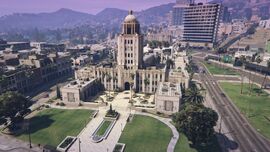 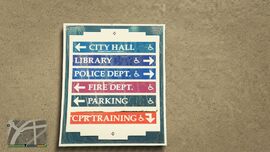 Access possible from the other building north of Eastbourne Way.
Add a photo to this gallery
Retrieved from "https://gta.fandom.com/wiki/Rockford_Hills_City_Hall?oldid=1154608"
Community content is available under CC-BY-SA unless otherwise noted.