"Playground for the rich and famous - and for fat Midwestern tourists to come and gawp at the rich and famous on bus tours -- Rockford Hills has the highest concentration of silicone and new-money douchebags in bad marriages trying to spend their way to happiness in Los Santos."
―GTA V digital manual.

Rockford Hills can be divided into two sections: northern end and southern end. The northern end consists of mostly residential homes and a small street with fancy restaurants. The southern end is dedicated to shopping and is also where Portola Drive is located. The Rockford Hills City Hall is located at the centre, just across the street from Mount Zonah Medical Center. The fire station and police station are situated here as well. In the east, the Rockford Plaza serves as the shopping centre to obtain overpriced clothing.

The district contains many high-end mansions, most of them built using Spanish-style architecture, a common styling for mansions in real-life Beverly Hills. Almost all of the mansions in Rockford Hills have a gate, a swimming pool, and a tennis court.

The area is a setting for many missions in the game, particularly those which start or occur at Michael's mansion.

In Complications, Simeon orders Franklin to secretly invade the mansion and repossess Jimmy's BeeJay XL. Michael, hidden in the back seat, threatens Franklin with a gun and orders him to smash the windows of Simeon's dealership.

In Did Somebody Say Yoga?, Michael is given a spiked drink by Jimmy, he's pushed out of his car by Jimmy near their mansion in the neighborhood, shortly before the fictitious Michael's nightmare of an alien abduction occurs.

In Meltdown, Devin Weston sends several Merryweather guards to take hostage of Michael's family, while Michael and Jimmy were in the Oriental Theater celebrating their film. A large shootout between Michael and the guards took place in the mansion, and Michael's family survived.

Rockford Hills is home to higher-end businesses, in particular fashion as well as food.

Artwork of a woman holding a Bullpup Rifle in Rockford Hills.

A screenshot depicting Franklin in front of the Rockford Hills sign.

De Santa Residence (back side view).

A mansion in Rockford Hills.

Richards Majestic and Weazel Plaza, the tallest buildings in the district.

The Epsilon Building in Rockford Hills. 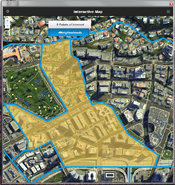 Satellite view of Rockford Hills during character switching.
Add a photo to this gallery

Retrieved from "https://gta.fandom.com/wiki/Rockford_Hills?oldid=1207193"
Community content is available under CC-BY-SA unless otherwise noted.