"Since the first caveman jumped off a cliff in a futile bid to get laid, man has dreamed of flight. The perfect freedom, the solitude, the silence. Well, now that dream is real. Only you're strapped into the love child of a super car and a space shuttle, there's 15 other grinning lunatics on every side of you, and all you can hear are explosions and screams. So quite a bit better, if anything. Lap race for the Rocket Voltic."
―Race description.

Zebra II is a Special Vehicle Stunt Race featured in Grand Theft Auto Online as part of the Cunning Stunts: Special Vehicle Circuit update. It is locked to the Coil Rocket Voltic and is available for up to 16 players.

The race is a 53 checkpoint long Lap race that begins right above the Pacific Ocean. The course begins on a piece of straight track that ends before a set of white tubes that turn left. After the tubes, the course is now sideways and the course continues until reaching a small section of tubes, followed by a jump. 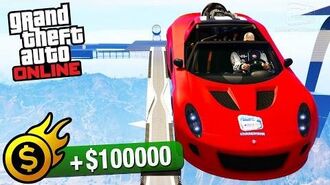 Retrieved from "https://gta.fandom.com/wiki/Rocket_Voltic_-_Zebra_II?oldid=1275499"
Community content is available under CC-BY-SA unless otherwise noted.