"Ever since the acid told you that yellow and black lizard was a corn on the cob, you've known an attractive color scheme when you see one. This time, it's a rocket-propelled super car and 3000 foot drop, but you get the idea: book a place in the ER, and take a bite. Lap race for the Rocket Voltic."
―Race description.

Bumblebee is a Special Vehicle Stunt Race featured in Grand Theft Auto Online as part of the Cunning Stunts: Special Vehicle Circuit update. It is locked to the Coil Rocket Voltic and is available for up to 16 players.

The race is a 49 checkpoint long Lap race that begins several hundred feet high in the sky. The course starts off with a small jump, which leads to a curved black and yellow platform. After the platform, the course goes inside tubes which then turn right until reaching a jump, followed by a large platform. 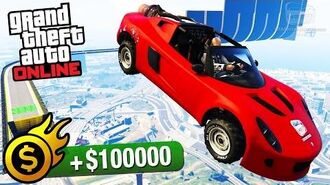 Retrieved from "https://gta.fandom.com/wiki/Rocket_Voltic_-_Bumblebee?oldid=1275494"
Community content is available under CC-BY-SA unless otherwise noted.