"You can still remember watching that rocket launch on TV and whispering with excitement 'Mommy, can I be an astronaut?' And when mommy pointed out that you were a 35-year-old morbidly obese junkie living in her basement, you felt that beautiful dream die a little. Well, time to suit up and show them you're never too old or underqualified to burn up on reentry. Point to point race for the Rocket Voltic."
―Race description.

Atmosphere is a Special Vehicle Stunt Race featured in Grand Theft Auto Online as part of the Cunning Stunts: Special Vehicle Circuit update. It is locked to the Coil Rocket Voltic and is available for up to 16 players.

The race is a 25 checkpoint long Point-to-point race that begins high in the sky. The course begins on a piece of straight track that leads to two right turns, followed by a left in the white and gray tubes. Halfway through the tubes, they begin going down and lead to a jump.

After the jump, the course continues on and leads to three left turns, followed by another jump. From there, the course continues straight on and then drops down a little. The course then proceeds to turn left and leads to some more tubes, followed by the tubes going almost straight up and leading to a large drop-off. From there, the course takes on a zebra pattern and proceeds to go slightly right before the race ends near the mountains. 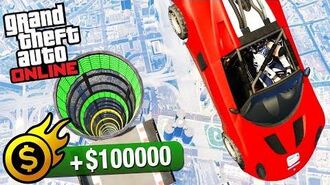 Retrieved from "https://gta.fandom.com/wiki/Rocket_Voltic_-_Atmosphere?oldid=1275493"
Community content is available under CC-BY-SA unless otherwise noted.