Standard White - 100%
“There's a very sound reason we don't strap space shuttle parts onto sports cars. But no one in the boardroom at Coil knew what that reason was, so here we are. Once you hit the button you're more likely to get into orbit than stay on the road, and no one has yet survived either outcome to tell us if it was worth it. Probably was though.

Note, the production model of this vehicle has a longer recharge time on uses of the rocket burst.

The Coil Rocket Voltic is a modified sports car featured in Grand Theft Auto Online as part of the Import/Export update.

The Rocket Voltic is essentially a Voltic with a large "rocket" engine attached to the rear. While seemingly identical to the Voltic in body design and wheelbase, the rear of the car was heavily modified, with two intakes on the cabin area, a fuel cap on the driver-side rear section and a central cut-out on the rear end, having the silver "COIL" lettering relocated below the turbine. The area behind the cabin is covered by a panel and featuring multiple hoses for the aforementioned turbine. The interior of the car uses the same components as the standard Voltic, but features numerous switches and steel foot rests in a similar manner to vehicles like the RE-7B and the ETR1, as well as a padded roll cage and race seats.

Color distribution is slightly changed, where the primary one paints most of the body and the interior stitching, while the secondary one is applied on the rear cover where the turbine and the hoses are seen emerging from. Although not accessible, a tertiary color is also available for the cage paddings, which is set to black when purchased. It shares the same rim design as the standard Voltic, being a derivative of the "FiftyNine" sport rims available in Los Santos Customs.

While the car shares the electric engine as the normal Voltic, it is slightly heavier due to the addition of the rocket on the back, but still has good acceleration thanks to the direct transmission between the engine and the wheels.

The Rocket Voltic is fitted with a large rocket booster that, when used, emits a small burst that propels the vehicle at high speed for a second. From a stand-still, the vehicle will be boosted from 0 to around 130 miles per hour in approximately 1.5 seconds, and running at top speed, it will boost to around 140. After that, the rocket needs a recharge time of nine seconds before being used again, but should be noted that it will not recharge until the car lands on all four wheels. However, the vehicle may become airborne again and it will continue to recharge as long as it is grounded afterwards.

Like the fighter jets' turbines, the Rocket Voltic's turbine will push away any player or pedestrian that is standing in front of the same if the rocket burst feature is used, even killing them. The player needs to be very careful on using its turbine, as it can propel forward and crash headlong into traffic.

A Rocket Voltic with its rocket engine activated.

The Rocket Voltic on the Rockstar Games Social Club. 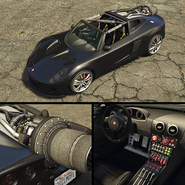 The Rocket Voltic on the updated Rockstar Games Social Club.

The Rocket Voltic in a Cinematic preview on Rockstar Games Social Club.

Other vehicles with rocket booster: