Spoiler Warning: Plot details, ending details, or both are in the text which follows.
“Then you're a dead man. You and your family, and those spic drug dealers you hang out with, you're all dead. It's your choice.”
— Rocco Pelosi to Luis Fernando Lopez.

Rocco is a Italian-American gangster and made man in the Algonquin based Ancelotti crime family, in which he serves as a loan shark/debt collector. He works alongside his uncle, Vince, an Ancelotti enforcer. Tony Prince owes him money, thus forcing him and Luis Lopez to work for him.

He is a made member of the Ancelotti Crime Family and a distant relative of both Giovanni and Gracie Ancelotti. He is often seen alongside his uncle Vince, being more influential within the family than him despite his young age. Rocco's exact status in the crime family is unknown, likely soldato, as well as his connection to Ancelotti capos Tony Black or Frank Garone.

Events prior to The Ballad of Gay Tony

Some time prior to the events of The Ballad of Gay Tony, Tony Prince borrowed a huge loan from Don Giovanni. Due to Tony being unable to pay his debts to the Ancelotti family, Giovanni sends Rocco and Vince to make weekly collections from Tony.

Rocco appears for the first time in I Luv LC when he and Vince are collecting money from Tony. He also meets Tony's bodyguard Luis Lopez and immediately throws racial slurs at him in a similar fashion, calling him a "spic" and a "taco", prompting Luis to respond and refer to Rocco as a "guido". He also voices his clear dislike for Tony, as he frequently mocks him with slurs such as "fag", knowing Tony is not in the position to fight him back. Behind his back, Tony and Luis agree that he is a "wannabe" who is "out of his league" and they constantly mock him.

After some time, Rocco tasks Luis and Tony to help him interrogate a union official at a golf course. However, members of a rival crime family attack the place. After the mobsters are dealt with and if the official is not killed, Rocco leaves with him, presumably to further interrogate and kill him.

This help from Tony and Luis does not wipe out the debt and Rocco again gives a mission to Tony and Luis: seduce the girlfriend of Vic Mazano and take over his club. Luis ends up killing Vic and barely makes it out alive after an ambush by Triads. Luis suspects that Rocco set him up.

Rocco is seen again in Tony's apartment, during a coke party. Some guests of the party include Evan Moss and Gracie.

“You fucking killed yourself just then! There's Russians, fucking everyone they're coming after you, the Old Man, you're fucking dead, the both of you. They're coming any second and they're expecting corpses.”
— Rocco Pelosi threatening Luis Lopez.

In a complex chain of events, the diamonds attract thieves who kidnap Gracie and demand the diamonds. Giovanni Ancelotti makes a truce with the original owner of the stolen diamonds, Ray Bulgarin, and both blame Rocco, Tony and Luis for the incidents. Rocco, in a twisted gesture of compassion, offers to spare Luis and own the clubs with him if he personally kills Tony. Although he briefly considers it, Luis instead kills Uncle Vince and is about to kill Rocco, but Tony saves him by telling Luis that he is a made man. Rocco then leaves the club. Shortly after, Luis and Tony fight off a Russian hit squad.

Rocco is not heard or seen again after the completion of the story. If the player calls Rocco's number after Departure Time, Rocco's voicemail message states that he has fled Liberty City to "lay low" for a while.

“How you like this space?
It's gonna be an EDM paradise!
There's gonna be sparklers stuck in bottles, implants, tramp stamps, all the real shit. That's Pelosi Entertainment.”
— Rocco on exiting his Frogger on the roof of his club

Rocco appears in GTA V where he is shown to be in Los Santos after he escaped from Liberty City. He is developing a Nightclub in East Los Santos, while also acting as a talent agent and maintaining his ties to the Liberty City mob[1]. When the game takes place, Rocco attempts his scam once more. He is signing up actor Milton McIlroy, who is appearing in movie producer Solomon Richards' most recent movie, Meltdown. However, Solomon sends Michael De Santa to threaten Rocco into giving up his extortion. Michael sneaks onto Rocco's building and confronts him on his helipad, beating him severely and then taking McIlroy and director Anton Beaudelaire back to the Richards Majestic Productions studio, scaring them into obedience on the flight back.

Later on, a vengeful Rocco and his associate Gianni break into Solomon's studio and assault Solomon for sending Michael after them and failing their scheme. However, Michael arrives just in the nick of time as he was about to meet with Solomon and after helping up Solomon to get up on his feet, Solomon tells Michael to get Rocco and Gianni. Michael obliges and chases both Rocco and Gianni out of the studio and through the city. After optionally wrecking their car, Michael kills Gianni and then kills Rocco as well.

From his appearances, Rocco is shown to be an extremely arrogant, sadistic, cocky and disrespectful Ancelotti gangster who shows open contempt towards Luis and Tony and is rude to almost everyone he encounters.

Rocco and his uncle Vince have a dark sense of humour derived from their sadistic pleasure of making other people around them miserable and their delight in bullying and mocking them in whatever way they can and make them feel uncomfortable. Like Vince, Rocco is openly racist and homophobic, as he uses various racial and homophobic slurs towards both Luis and Tony (such as "fag", "homo", "spic" and "taco") as they know very well that Tony can't and won't fight back. Luis, however, is not afraid of Rocco and does not put up with his and Vince's harassment and bullying, as evidenced when he fires a similar racial slur ("guido") in Rocco's direction.

Rocco takes great pride in being a member of the Ancelotti family and being related to Don Ancelotti and his daughter and often expressed his belief that his connections made him untouchable. Despite all of this, Rocco usually avoids brutal violence and rather makes somebody else perform violent acts on his behalf. Despite his supposed connections, Rocco's true colors reveal that he is a very cowardly individual as he fled Liberty City the moment his uncle was murdered to escape from Tony and Luis' wrath.

Luis voices his contempt of Rocco to his face and distrusts him (for example, he claims that Chinese Takeout and Boulevard Baby were both traps set by Rocco to kill him). Rocco, though normally very disrespectful, prefers Luis and occasionally delegates to him when trying to restrain or exclude Tony. Rocco also showed that he has a small degree of trust in Tony's business practices - despite saying his judgment is clouded by a "midlife crisis", as he sees a very big monetary value in Maisonette 9.

Rocco appeared to like Luis more than Tony (even though Tony tried any way he can to pay off his debts to the Ancelotti crime family) and he offered to wipe out the debt if Luis kills Tony. Ironically, Luis killed Vince instead and was ready to shoot Rocco when Tony defended him and said it was a bad idea because Rocco is a "made man". With this act, Tony saved Rocco's life, even though Rocco heavily insulted him and was going to have him killed by Luis, who couldn't kill his friend because of "second thoughts".

This arrogance and cowardice carries over to Grand Theft Auto V; he arrogantly dismisses Michael during their first meeting, and after his first fight with Michael goes poorly, he attempts to intimidate Solomon (a much older man than either Rocco or Michael) and immediately flees when Michael appears. What little violence Rocco needs done in this game he does himself, but that may be only because his diminished circumstances mean he has nobody else to push it on.

In The Ballad of Gay Tony, Rocco has only two outfits:

In GTA V, he wears a pink v-neck t-shirt, a black leather jacket, a pair of blue jeans and black shoes. 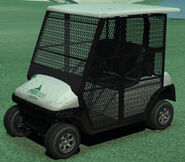 Rocco in The Ballad of Gay Tony.

Rocco's reaction to his uncle's death. 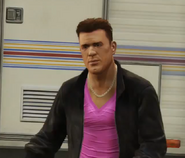 Rocco being chased by Michael.