Waste the Wife (with Mall Shootout)

In-game time
“Mr. Teal, your help in eradicating those out-of-towners was invaluable to business. I have more work for you with a more 'hands-on' approach. Your next job is taped under the phone...”
— Mr. Black

Road Kill is the first mission in Grand Theft Auto: Vice City given to protagonist Tommy Vercetti by Mr. Black from a payphone at the Washington Mall in Washington Beach, Vice City.

Mr. Black contacts Tommy Vercetti after Jury Fury, believing him to be Leo Teal, a person who Tommy killed not too long ago, after learning he might have been involved in the ambushed deal Tommy participated in. Mr. Black tells him to go to the payphone in Washington Mall. When Tommy arrives, Mr. Black will tell Tommy he will find the instructions underneath the payphone. The instructions state that pizza delivery man Carl Pearson is to be killed before he finishes making his deliveries. Tommy then locates and kills Pearson, completing the mission. 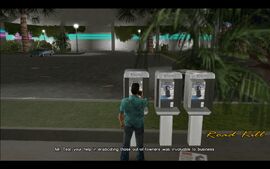 Tommy picks up the ringing payphone near the mall in Washington Beach. And is mistakenly referred to by the caller as "Mr. Teal", the chef who's cell phone Tommy took after killing him. The caller congratulates Tommy on dealing with the out-of-towners, possibly referring to Tommy and his friends, Harry and Lee. 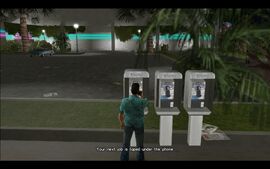 The caller tells Tommy that his next job is taped under the phone before hanging up. 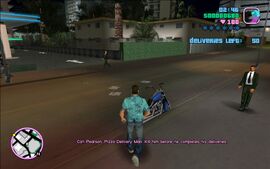 Tommy will have to kill Carl Pearson, a pizza delivery man doing his rounds around Vice City Beach. 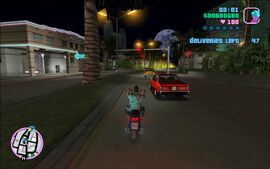 Tommy on his way to kill Carl Pearson. 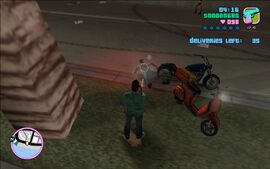 Tommy killing the down Carl after knocking him off his scooter. 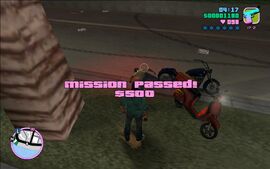