"From the chilli house to the bacon factory to the LS River, this lap race for cars and motorbikes beats a path around South Los Santos."
―Race description.

Ring of Fire is a race featured in Grand Theft Auto Online. Up to 8 players in any vehicle class except utility race a circuit around the South Los Santos streets.

The overall counterclockwise course is fairly narrow; most of it is only two lanes wide. In addition, the combination of several sharp turns and a slick, high-speed, and curvy backstretch, along with several potential obstructions (light and telephone poles, the Los Santos Storm Drain and a ramp going to the drain, and the parking garage featured in Rooftop Rumble) can cause the player to crash, get stuck, or veer off-course, losing valuable time. In particular, the first two turns (sharp right-handed and left-handed turns respectively) can create a bottleneck of cars due to the separating fence and signals of the railroad (and the occasional Train) along with the air vents of the Los Santos Transit Light Rail's underground tunnel acting as obstructions. 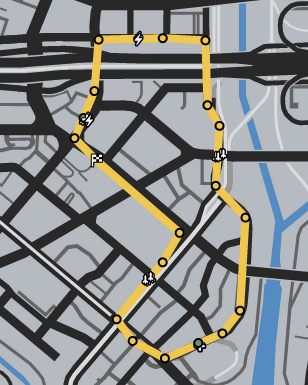 Retrieved from "https://gta.fandom.com/wiki/Ring_of_Fire?oldid=1191052"
Community content is available under CC-BY-SA unless otherwise noted.