No Love Lost
Logging On

The Master and the Molotov
Search and Delete

In-game time
For the mission with the same name in Grand Theft Auto III, see Rigged to Blow (GTA III).

Niko: "Life is complicated. I... I never thought I'd live like this."
Ilyena: "No?"
Niko: "When the war came, I did bad things. And after the war, I thought nothing of doing bad things. I killed people, smuggled people, sold people."
Ilyena: "And you don't worry about your soul?"
Niko: "After you walk into a village, and you see fifty children, all sitting neatly in a row against the church wall, each with their throats cut and their hands chopped off, you realize that the creature that could do this doesn't have a soul."
—Conversation between Ilyena Faustin and Niko Bellic while drinking tea.

Rigged to Blow is the final mission in Grand Theft Auto IV given to protagonist Niko Bellic by Russian Mafia leader Mikhail Faustin from his house on Shinnecock Avenue in Beachgate, Broker.

Niko arrives at Mikhail's house, but he is not home and his wife Ilyena Faustin answers the door. She invites him in and serves him tea from a samovar (a rustic-looking tea dispenser) on their dining table, and tells Niko that Mikhail yells at her for using it, because he thinks it makes them look like "barbarians" and uncivilized.

Ilyena tells Niko that Mikhail did not used to be short-fused. Back when they were young and still living in Russia, Mikhail was beautiful, happy, and he made her happy. But something changed years ago and she never quite figured out what it was. She wondered how she did not see it in him, and thinks that she might have changed him. Niko started talking about his life during the war. He claimed to have done bad things during the war and thought nothing about it after the war. He had killed, smuggled and sold people. Ilyena asks Niko if he is concerned about his soul, and Niko vents that he entered a village and saw fifty innocent children sitting on the church wall all with their throats cut and their hands chopped off; he realized that the soldier who did it didn't have a soul (perhaps alluding to Niko not believing in souls).

Mikhail and his partner Dimitri Rascalov enter. Mikhail first knocks over the tea dispenser in a fit of rage and yells at his wife for ignoring him, causing her to cry and run off. Mikhail tells Niko that he wants people to be taught lessons, but Dimitri wants to get his money instead. Dimitri wants Mikhail to calm down so that they won't be in more trouble with Kenny Petrovic. Mikhail is angered by Dimitri's insistence that Mikhail is wrong and orders him to get out. Mikhail wants Niko to pick up a truck parked on Montauk Avenue in Schottler.

Once Niko enters the truck he will call Faustin, who reveals that the truck is rigged with a bomb, packed solid with high-yield very sensitive explosives. Niko must drive the truck to a garage in Chase Point, Bohan without colliding much, otherwise the bomb will detonate. There is a light on the back of the truck that indicates when the explosive is becoming unstable, followed by a speeding-up beep.

After reaching the destination, Niko arms the bomb, then makes a run for it. A cutscene ensues showing the explosion. After that, Niko flees the scene before the police arrive.

Niko calls Mikhail saying that he will not do something like this again. Mikhail thought Niko is tougher than this and insults Niko that he is as weak as Dimitri (also mocking him as he is the "ice-cold killer"). From this point on, Niko refuses to do any more work for Mikhail.

"An explosion has occurred at a garage on Guantanamo Ave and Windmill Street in South Bohan. Investigators on the scene have found traces of ammonium nitrate and nitromethane as well as the remains of a large truck. These are common ingredients in explosive devices. It doesn't take a genius to connect the dots and blame terrorists here in Liberty City for the horrific destruction wrought at the garage. Luckily, no employees were present at the time of detonation. The garage is located on a busy street where people walk to go to work and do their shopping. We got lucky this time."

"Again, Liberty City shakes with the sound of a large explosion. In response, our liberal Mayor, Julio Ochoa, has raised the terror threat level to Black 8. Residents of South Bohan would have been better off with a warning yesterday, Mr. Mayor. A Russian immigrant, Kenny Petrovic, owns the garage. Mr. Petrovic was unable to comment as we went to press. Why terrorists chose to target this business, we know not. But this does illustrate the point that no one is safe. The enemy can just as easily attack a privately-owned business as a national institution."

"All Americans citizens and residents are terrorists targets and they will stop at nothing before our livelihoods, our freedoms and our very lives are stripped from us. Something like this only serves to remind us of how valuable the sacrifices being made by our sons and daughters in conflict zones around the world really are."

"An explosion in Bohan has citizens scared and our ratings up! Eric House is on the scene."

Eric House: "Reporters are rioting on the scene of an explosion at a garage in South Bohan on the corner of Guantanamo and Windmill."

Pedestrian: "I just heard this big boom and then I saw these flames everywhere and smoke and stuff! It's gotta be terrorists! I said they was coming!"

Eric House: "A foreign looking man was seen leaving the site only moments before the explosion. He is wanted for questioning. In South Bohan, I'm Eric House, Weazel News." 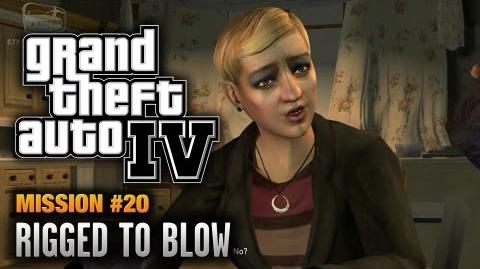