The Rifle takes the form of a Marlin Model 336 and is depicted as a scope-less sniper rifle, based on its in-game categorization.

Hitting the aim button with this won't invoke an auto-target reticle, but instead skips straight to a free-aim mode. Its per-bullet damage rate is behind only to the Sniper Rifle, Minigun, and Desert Eagle (at Gangster level and up), where it mostly takes 2 hits to kill enemies in normal health. However, given its lack of a lock-on feature, weapon skill, and slow reloading, it is not a good choice for beginners, but it does earn its keep in the hands of a decent marksman. The lack of the scope may possibly mean a disadvantage on long-range assaults, but this allows for a better field of view when aiming, allowing the player to detect any oncoming enemies.

This rifle is surprisingly very accurate, despite the lack of usable scope. In the PS2 version, the player can also move while aiming the gun (a feature that is not present on the Sniper Rifle). However without expert use and timing, this rifle is relatively hard for hitting moving targets especially at longer distance.

The rifle sometimes fail to detect enemy's "hitboxes", where players may have aimed and fired the gun precisely on target but the bullet will just pass through them, missing the shot. This bug is less likely to occur if fired on enemy's chest and stomach however.

One signature advantage of this gun is if it hits the center part of the enemy's torso back or front, it will knock them to the ground (similar to shotguns in close range), giving players valuable time to retreat or to finish them off with another shot before they stand up again. Doing this against crouching enemies might be difficult. 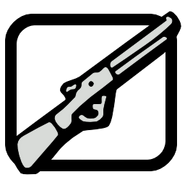 The Rifle aimed in first person view on mobile version.

The unreachable Rifle located "inside" the Corvin Stadium through Blue Hell.