In-game time
“If the financial crisis taught us anything, it's that the wealthy have as much trouble with the credit as the poor do. A man in Richman took two expensive cars from me, and now you must repossess them, and bring them to the showroom. You may need some help with this, I think he has security.”
— Description.

Rich Men in Richman is a mission in Grand Theft Auto Online. It is given to the player by Simeon Yetarian. It is available for up to four players.

The player is required to steal two luxury cars from the Richman Mansion in Richman - the Stinger GT and the Super Diamond. The two cars are found within the mansion's driveway outside a double garage at the southern face of the mansion. The player needs to hack a gate in order to gain access to the mansion, take out the guards, and steal the cars. Pursuing cops must be lost before the car(s) can be dropped off at Simeon's dealership; Premium Deluxe Motorsport. Once both cars are stolen and dropped off behind the dealership, Simeon thanks the player(s) for the help, and rewards the player.

Once the mission is loaded, the player is told to reach the Richman Mansion. It is located in Richman, and a yellow waypoint will be displayed on the GPS. The player will need to drive near the entry gateway in order to gain the next objective.

Once the player reaches the mansion, they are instructed to hack the keypad to gain access. The keypad is mounted on the left pillar of the entrance gateway, and the player will need to complete a hacking mini-game in order to successfully hack the gate open.

After navigating to BruteForce.exe, the player will need to complete the hacking mini-game. The individual columns of numbers will slide down, the player has to align the red letter within the two lines. Green indicates the column selected. Once a letter is aligned, the next column is automatically selected. Failing to align the moving letters between the two lines will restart the entire hack. The player is given 1 minute to do this.

Once the player successfully hacks the gate open, guards will be alerted. Guards will spree from several locations, including from the garage itself, the gardens outside, and the exterior of the backyard. The two cars to steal are marked in blue on the map and are parked beside each other outside the garage.

As soon as the player(s) enters the car, they will gain a wanted level. Shooting the guards may also increase the wanted level beforehand. The player must lose the police in order to deliver the cars. Hiding in the multi-storey car parks is a good way of losing a wanted level; there is one just south of the mansion upon exiting.

After losing the wanted level, the player can deliver the car. The cars are to be delivered at Premium Deluxe Motorsport - Simeon's own dealership, located in Pillbox Hill. It will be marked on the map as a yellow waypoint. The player must park the cars round the back, in the parking spaces provided.

After the mission is completed (once both cars are delivered), Simeon will thank the player(s), and the player will be rewarded. 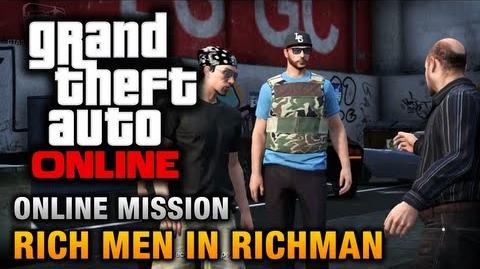 Location of Richman Mansion on the map.

Arriving at the mansion.

Locations of the cars on the map.

The Stinger GT and Super Diamond (left to right).

Location of Premium Deluxe Motorsport on the map.

Arriving at the dealership.

Arriving at the dealership.

Simeon talking to the player.