Standard White - 100%
“When you think of a concept car, you probably think of some nitrous-charged bauble with funky aerodynamics and a silly name. But there are other concepts to choose from. "Bone-splintering torque," for example. Or "churning the natural world to a ravaged pulp beneath your giant, reinforced tires". And when those are the concepts you're after, you buy American, you buy Vapid, and you buy the Riata.”

The Vapid Riata is an off-road truck featured in Grand Theft Auto Online as part of the The Doomsday Heist update.

The Riata is heavily based on the Ford Bronco Concept by Bronco6G.com, seen in the overall profile and key features. However, unlike the websites Concept, the Riata is a pickup truck by default rather than a SUV (although a bed cap modification can be bought from Los Santos Customs). The tail lights are very similar to those of the 2016–present Nissan Titan.

The front of the Riata is large, featuring a plastic bumper with small lamps, a gray grille and a set of circular lights, Daytime running lights and turning light strips. A silver "VAPID" badge can be seen embossed above the grille, and the hood features a small bulge. The sides are characterized by the bulky arches and skirting area, as well as the tubular side steps at the bottom. The cabin is relatively simple and features gray rear-view mirrors, a black rear frame with a single red light, and a LED floodlight bar on the roof. The rear end features a tailgate with a black handle on the center and the corresponing badges on the upper side. The outer edges house the red tail lights with the smaller square lights on it (which were later copied for the Caracara and its 4x4 variant in later updates). The rear bumper is of a light gray color with dark gray upper surfaces. The interior uses the same dials and textures as the Cavalcade.

Most of its bodywork is painted in a primary color, while part of the sides are painted in a secondary color. Its wheels use the same rim design as the Bodhi, wrapped in high-profile tires with knobby treads.

The Riata's heavy-duty suspension and off-road wheels makes it a force to be reckoned with in off-road environments, though while it sports great durability, it is very prone to fishtailing at even medium speeds on asphalt roads. This makes it rather unsuitable for urban driving due to it being very slippery, especially when dealing with congested traffic. While great at dealing punishments from traffic collisions, its high ground clearance means that running over a smaller vehicle or bike can prove hazardous as it can greatly cause a rollover if driving over either smaller cars or objects at medium-to-high speeds. And unlike other heavier vehicles such as the Insurgent, it does not bode well in plowing through traffic as it could stop its momentum as a result. Its tires are also exposed to gunfire and bulletproof tires are a must as to keep it from being punctured.

The Riata's bodywork does not deform, no matter how severe the crashes are. In addition, its roof lights still remain operational even if they are shot or crashed repeatedly.

The Riata is powered by a twin-cam Inline-4 engine with throttle bodies, similar to the Futo. Said engine is coupled to a 4-speed gearbox in a front-engine, all-wheel-drive (50/50, front to rear) layout. Its sound is a slightly altered version of the diesel sound used in SUVs, such as the Granger, featuring a loud tone. 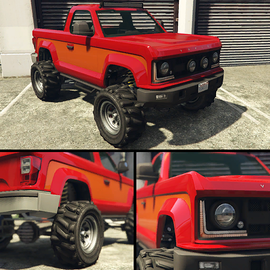 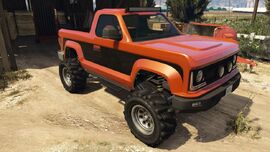 The Riata on the updated Rockstar Games Social Club. 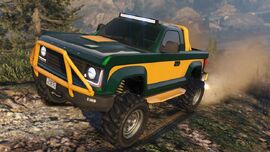 The Riata in the cinematic preview on Rockstar Games Social Club. 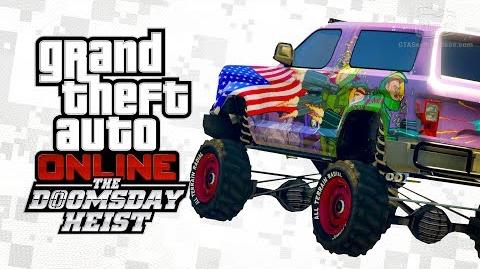