GTA Wiki
Register
Don't have an account?
Sign In
Advertisement
in: Minigames, Features in GTA San Andreas, Features in The Ballad of Gay Tony, Features

Rhythm-based minigames refer to minigames in the Grand Theft Auto series where the player is required to enter a sequence of commands in a rhythmical fashion that often plays alongside a certain song. The feature was introduced in Grand Theft Auto: San Andreas in two forms: dancing and lowriders "bouncing" with hydraulics. The feature has resurfaced in The Ballad of Gay Tony, a DLC for Grand Theft Auto IV, in the form of a dancing minigame in clubs. Dancing also reappears as an activity in Grand Theft Auto Online as a part of the After Hours update without a minigame component.

The concept of the minigame is simple. As a certain song is played, a sequence of arrows denoting the directional key that the player must press will scroll from right to left, passing a circular marker in the middle of the screen. As each arrow passes the marker, the player must key in the corresponding command to score points; the timing of each player command is rated according to the position of the arrow within the marker, and the overall performance of the player is rated as soon as the player enters their first rhythmical command, all the way to the end of the minigame. In both cases, the timing of each command and the overall performance as the game progresses may be rated as "Perfect", "Good" or "Bad", and the amount of scores given depends on the former.

In GTA San Andreas, dancing minigames are usually only available in nightclubs, including Alhambra in Los Santos, Gaydar Station in San Fierro, and an unnamed club east of The Camel's Toe in Las Venturas; during one mission, "Life's a Beach", the player is required to score a minimal number of points to proceed in the mission. While in a nightclub, there are three levels in dancing that increases in difficulty with an increased number of rhythmical commands to follow; as the player passes a level by reaching a certain score, they move on the next level:

While dancing, players may witness the player character's performance on the dance floor. If they miss a rhythm, the player's character will perform a poor dance; if they time their rhythm right, however, the player character will evidently dance better. In addition, spectators on the sidelines may cheer or jeer the player depending on their performance. Like most minigames, successful dancing has no significant benefits except to please girlfriends that the player brings along. And on dates, "Hollywood Swingin'" is the only song played, although the dance pattern changes periodically.

Although most walkthroughs indicate that the Life's a Beach mission unlocks the ability to dance at clubs, in fact it's possible to enter the Alhambra club and play the mini-game from the very start of the game.

Lowrider bouncing in GTA San Andreas, also known as the Lowrider Challenge, functions similarly as dancing, except the player assumes the command of a lowrider equipped with hydraulics and bounces to the rhythms of Johnny Harris's "Odyssey" or Ronnie Hudson & The Street People's "West Coast Poplock" in all three levels. The completion of the minigame is mandatory during "Cesar Vialpando", and the player can re-enter the same lowrider meet at Unity Station if they are in a hydraulic-equipped lowrider. Unlike dancing, the player can bet a small sum of money against an opposing lowrider competitor, and must beat said competitor by scoring the highest number of points.

The dancing and lowrider minigames each employ their own set of button or keys. For dancing, action buttons are used for the console versions while the directional keys are assigned for the PC version; lowrider bouncing requires the use of an analog stick in console versions or specialized directional keys in the PC version, as players do when bouncing their lowrider outside the minigame.

Due to poorer graphical optimization, scoring points during these minigames in the PC version may be more difficult due to synchronized music that often misleads players to follow the beat slightly slower or slightly faster.

After a lengthy absence, rhythm-based dancing is reintroduced in The Ballad of Gay Tony, allowing the player to perform dance moves on the dance floors of various clubs in the game especially Maisonette 9 and Hercules, the two nightclubs owned and run by Anthony "Gay Tony" Prince. TBoGT's rhythm-based system has undergone an overhaul, utilizing two sets of controller commands. Instead of a score-based evaluation of the player's performance, the primary objective in TBoGT is to fill a meter wrapped around a bumping subwoofer via two means:[1]

When the meter is more than a quarter full, the player's character, Luis, will be joined by a female dancer on the dance floor. If the player performs well enough, the game may even trigger a large choreographed dance and even a dance-off with the stage dancer, both of which utilize a more traditional Quick Time Event-like gameplay where the player taps a specific button as instructed by the game.[1]

When Luis perfects the dancing minigame with a female dancer in Maisonette 9, they will have casual sex in the women's restroom. For dancing perfectly in Hercules and completing the dance-off, Luis will lead a bus-stop dance to the song "Bus Stop" by The Fatback Band. Upon successfully completing the bus stop dance, it will be unlocked in Maisonette 9 and can be activated by perfecting the solo dance. The bus stop will be lead once again by Luis and the song "Boogie 2nite" by Booty Luv.

The achievement/trophy "TBoGT: Catch the Bus" which is worth 15 gamerscore on Xbox 360 and is Bronze on PlayStation 3 and can be completed by performing both dance routines perfectly in both Hercules and Maisonette 9 clubs. 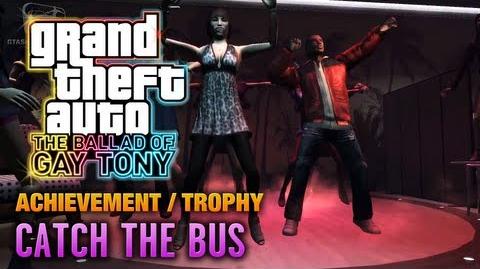