• ­Defend yourself against the Hunters.

• ­Take out the Rhino team.

"This is a battle of the nimble and numerous against the mighty but few as a team of Sticky Bomb-wielding Hunters in dune buggies and other vehicles seek to take down one or two of the biggest and most elusive game in Southern San Andreas. Rhino drivers must utilize the sheer strength and firepower of their tank to survive against the onslaught of Sticky Bombs thrown in their direction."
―Rockstar Newswire Description.

Rhino Hunt[1] is an Adversary Mode featured in Grand Theft Auto Online as part of the continuation of the Be My Valentine update, released on February 26, 2016, during the Rhino Hunt Week.

"How many foot soldiers does it take to take out a tank? Find out when a team, in vehicles and armed only with sticky bombs, tries to stop one or two players in a Rhino."
―Rockstar Games Social Club Description.

At the start of the Mode, the players are divided into two teams - Rhinos and Hunters. Rhinos are given Rhino tanks to use, whilst Hunters have a choice to use offroad vehicles, such as the BF Injection, Bifta, or Dune Buggy.

The Hunters must kill all Rhinos in three minutes and are armed only with Sticky Bombs. They have unlimited lives. Rhinos are not allowed to leave their vehicles and their tanks can withstand a higher amount of damage than usual before exploding. The game takes place in an open area, containing ramps and gates and in which several air or land vehicles are available to use for Hunters.

If a player remains outside the playing area for more than twenty seconds, they will automatically be disqualified.

Hunters win once all Rhinos have been killed. Rhinos win if they survive the onslaught for 3 minutes. 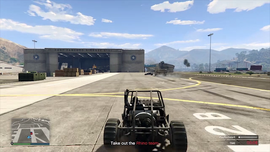 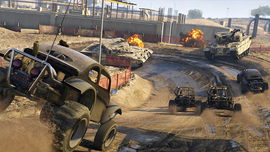 Retrieved from "https://gta.fandom.com/wiki/Rhino_Hunt?oldid=1170480"
Community content is available under CC-BY-SA unless otherwise noted.