The Rhino in GTA V

"60 tons of fun. A heavily-armored battle tank with a 1,500hp turbine engine and a 120mm cannon, the Rhino delivers a hell of a lot of bang for your buck. Much like its namesake, the Rhino is slow on the turn, surprisingly fast on the charge, and generally terrifying to anyone in the vicinity. One of the few vehicles still manufactured in America. Great for doomsday preppers."
―Warstock Cache & Carry webpage

Like its predecessor in Grand Theft Auto 2, the Rhino appears when the player attains a six star wanted rating. In all games, the Rhino can be avoided without much difficulty because of its slow speed and bad handling, but it's extremely deadly if the player attempts engaging one, and the soldier driving it always carries strong weapons. Also, when successfully stolen, authorities can bust the player due to the Rhino's slow speed. When it hits a vehicle, the vehicle most of the time explodes straight away; if not, it starts to burn instead, in Grand Theft Auto: Chinatown Wars however, this does not happen. Although the Rhino has a cannon it is never used by law enforcement, this however is changed in GTA Chinatown Wars as the Army will fire the cannon which causes massive damage to, and usually kills, the player. The Rhino is practically invincible to small arms fire and crashes; and only Satchel Charges, Dozens of other explosives and rockets and the Police Maverick's mounted gun can cause damage to it. Also, flame weapons (such as the molotov cocktails and flamethrower) can also be used to inflict damage. Note that it is also possible to destroy a tank with conventional ordnance, but it will take very long to destroy one. In GTA Liberty City Stories, if you can get the Rhino up and onto the tracks of the subway or the El-Train, the subway train or the El-Train will destroy the tank on impact.

In GTA: San Andreas and GTA: Liberty City Stories, it's possible to carjack a Rhino and even store one in a safehouse garage. Vice City Stories removes the ability to carjack the Rhino and unlike the other games where a Rhino spawn point is found, the tank is locked until a certain mission is completed (and even then the PS2 version of the game keeps the Rhino locked).

In GTA III, GTA Vice City, GTA Liberty City Stories and GTA Vice City Stories, the Rhino does not appear to be based off of any real life military vehicle. However in the front, does bear ressemblance to the 6 wheeled M93 Fox reconassaince vehicle, while the sides belongs to Panhard ERC 90. However its features also resemble the seemingly original but chunky design reminiscent of a modified M3 Stuart, but with a front that more closely resembles that of an M4 Sherman. Because of it's heavy construction, with doors on both sides that can be easily damaged with even the slightest hit, and a truck-style 3-axle drivetrain with easily seen wheels, The turret can only be rotated by pressing buttons, which makes precise shooting almost impossible.

In GTA San Andreas, the Rhino looks like an M1 Abrams and it is much more realistic than its predecessors. It is colored beige (desert camouflage), has a normal tank entrance in front and a new drive-train with smaller and more plentiful wheels, leading to even more of an increase in it's realism. It also has a new steering system, which finally allows the player to make very tight turns. The turret is operated with the mouse or right thumb-stick (PlayStation 2), which allows the player to shoot directly at the target; however, this does mean the Rhino can no longer simply fire backwards to deter pursuit while the camera still faces forwards for steering. The Rhino in GTA San Andreas is also heavy enough to literally push aircraft, making a Rhino an ideal vehicle to push the destroyed Andromada from "Stowaway".

Interestingly enough, none of the pre-GTA IV versions have caterpillar tracks, unlike their real world counterparts; this is likely due to tracks being too complex for the game's engine to render. In one of GTA IV's DLCs, The Lost and Damned, the text files for a Rhino tank are included, even though it never appears in game.

The Rhino does not appear in Grand Theft Auto IV; this is assumed to be because of Rockstar's goal of making GTA IV more realistic than previous games. However, it is replaced with the APC in The Ballad of Gay Tony and GTA Chinatown Wars reintroduces the Rhino with an appearance similar to the M7 Priest . The GTA Chinatown Wars' Rhino bears the distinction of being the first Rhino to ever be depicted as having tracks.

The Rhino returns in Grand Theft Auto V, resembling the German Leopard 2A3, and like GTA Chinatown Wars, is depicted as having tracks, making it overall the most realistic rendition of the vehicle in the series despite being modelled after a Non-American Military vehicle. It has a tank cannon and a unusabe MG. Like the SA model, there is a hatch to the driver, but in the left side of the tank. The turret is again controlled by the right thumb-stick with more accuracy than before, enabling it to turn really quicky or aim at pursuing helicopters above.

The various renditions of the Rhino

The inside of the Rhino in GTA San Andreas. 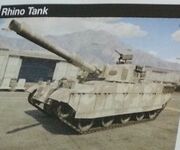 A pre-release prototype Rhino from Grand Theft Auto V.
Add a photo to this gallery

In GTA III and GTA Vice City, the Rhino is bullet-proof and explosion-proof and as such it is immune to all weapons except the flamethrower and molotovs. In GTA San Andreas, the Rhino is still a tough vehicle, however, after colliding several times with other tanks, it will start smoking and explode. While driving the Rhino, one should be careful not to drive through the flames left behind by vehicles that have exploded, as these will set the Rhino on fire doing massive damage and usually destroying it. In Grand Theft Auto: Chinatown Wars, the Rhino is immune to bullets but can still be destroyed by fire and about 10-15 hits from another Rhino's cannon or explosives.

Due to the introduction of treads for GTA Chinatown War's Rhino, the tank gains another a minor advantage in that it can turn while in a stationary position. The durability of the game's Rhino, however, is turned down a notch, being more vulnerable to explosive damage than previous renditions; a pristine Rhino will begin burning as a whole after receiving seven direct hits from a Rocket Launcher or another Rhino's turret.

While GTA V's Rhino is still very powerful, is not completely indestructible and can be destroyed if it gets caught near too many explosions or if one of the tracks gets caught on fire, which is a fairly rare occurrence. Large amounts of smoke coming out the back engine is a sign that the Rhino is losing power, and can be avoided more by staying away from fire and explosions as much as possible. The tracks allow it to turn reasonable well, though the tires can sometimes be shot out which can make it's handling more difficult.

In the tank, the player can perform vigilante missions, which means catching and killing suspects. The Rhino isn't necessarily the best vehicle to do this mission (especially not in games where the Hunter is available) because the player risks increasing his own wanted level at an accelerated rate due to the tank's penchant for collateral damage. On the other hand, if the player cannot complete the missions with the other, comparatively flimsy police vehicles, the Rhino might be better. If the player can intercept the enemy vehicles, rather than chasing them, the player may be able to strike the targets with the tank instead of firing on them. This method cuts down on the wanted level the player receives, which may help him avoid having to fight the military on some occasions.

In GTA Vice City, there is a mission in which the player has to steal a tank, Sir, Yes Sir!. Its doors are closed, so the player needs to wait until the driver hops out to buy some doughnuts, or kill the soldier on top of the tank. This tank has a self-destruct mechanism which the player must disable before it destroys the tank. In GTA Liberty City Stories, during the mission "Shogun Showdown", the Yakuza are storing weapons in a warehouse and along with that Toni Cipriani finds a Rhino which he later destroys by detonating it with a bomb. In GTA Chinatown Wars, during the mission Deadly Xin, Xin Shan has the player use a NOOSE Rhino parked at Francis International Airport to create havoc, diverting the police from his own machinations.

In GTA: San Andreas and GTA: Liberty City Stories, the player can use the Rhino to complete the Vigilante side-mission. Given its near-indestructibility and ability to destroy vehicles on contact, it is considered the easiest vehicle with which to complete the mission, even taking into account its slow speed.

Retrieved from "https://gta.fandom.com/wiki/Rhino?oldid=525703"
Community content is available under CC-BY-SA unless otherwise noted.