It is a purple and green colored restaurant, named after a large purple dinosaur eating a hotdog located to the western side of the diner. This T-Rex, which seems to be the restaurant's mascot, could be based on the real life Cabazon Dinosaurs in Southern California.

There is an ATM and an eCola vending machine at the front of the restaurant. Behind the building are some unused containers, oil tanks, and trailers. The diner is inaccessible to the player. 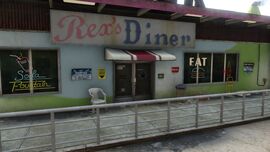 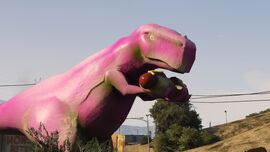 The dinosaur up close.
Add a photo to this gallery

Retrieved from "https://gta.fandom.com/wiki/Rex%27s_Diner?oldid=1270078"
Community content is available under CC-BY-SA unless otherwise noted.