"In your line of work, you demand flexibility. You need a car that can blend seamlessly into a line of executive saloons, but not look amiss when it arrives on the red carpet. It needs to look respectable dropping you off at court, threatening picking you up from Bolingbroke, and when the deal goes south, it needs room for a driver-operated machine gun upgrade. The Revolter can do all that in first gear – just wait till you see fifth.
Please note: Weapon modifications can only be applied at a Vehicle Workshop inside an Avenger or Mobile Operations Center."
―Legendary Motorsport description.

The Übermacht Revolter is a luxury 4-door sports sedan featured in Grand Theft Auto Online as part of the The Doomsday Heist update, released on January 23rd, 2018, during the Revolter Week event.

The Revolter is based on the Cadillac Escala Concept and the BMW 8 Series Gran Coupé Concept, based on the side profile, greenhouse area and tail lights. The headlights seem to resemble the ones from the Audi TT Mk3.

The car employs a variety of color combinations, where the primary one is applied to the majority of the bodywork and the secondary one on part of the front and rear ends, the hood and the roof. A trim color is applied to the interior dashboard.

The interior appears to be the same from the Nero, obviously altered to fit into the sedan layout. 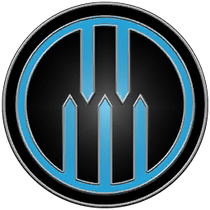 The Revolter exceeds many sports cars and even several super cars in various areas, but most significantly in its acceleration. Its immense acceleration is not only aided by a powerful engine, but also thanks to a large amount of traction, allowing it to step off the line almost instantly with no wheel spin. The car's top speed is also impressive but leaves room for improvement through upgrades.

The weight of the Revolter is very noticeable, being able to push through traffic with little resistance at moderate speeds. This, together with its very stable handling, makes it very easy to drive and allows the driver to push the car through traffic, around tight corners and over rough terrain with little trouble. It can be noted that, due to the car's traction, the Revolter almost never spins out of control as a result of oversteer, despite the car's turning circle being extremely small for a car of its weight and size.

To compensate for its handling and performance, the Revolter is notably weak and does not support any form of armor plating upgrades, and even seems to fall apart much easier than other cars, with doors and bumpers detaching very easily in crashes.

The Revolter is powered by a V8 engine, as suggested by the cover, and sounds similar to the Windsor and its convertible variant.

The Revolter can equip two driver-controlled machine guns on its front, which perform the same as those of vehicles like the Blazer Aqua and the Ruiner 2000, providing decent firepower against players and vehicles with none or light armor, but will struggle at heavily-armored vehicles.

The Revolter can be modified at Los Santos Customs, although the weapons can only be accessed by a Vehicle Workshop inside a Mobile Operations Center or Avenger. 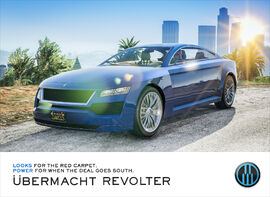 Advertising poster for the Revolter. 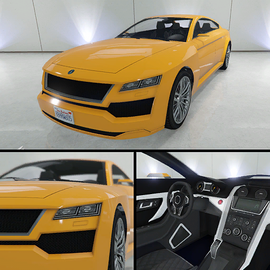 The Revolter on Legendary Motorsport.

Retrieved from "https://gta.fandom.com/wiki/Revolter?oldid=1168514"
Community content is available under CC-BY-SA unless otherwise noted.