Standard White - 100%
“Some sequels try to reinvent what's come before and stand alone on their own terms; the rest are bigger, brasher rehashes of the originals. Vapid knew exactly what they were aiming for with the Retinue MkII - its predecessor's soft curves were replaced with hard angles and the overpowered engine and rally-ready suspension came back with a vengeance. This is an American car for the European boy-racer market that feels all too familiar, and there's no shame in that.”
— Southern San Andreas Super Autos description.

The Vapid Retinue Mk II is a vintage coupe featured in Grand Theft Auto Online as part of the The Diamond Casino Heist update.

The Retinue Mk II holds a position as a more contemporary follow-up of the Retinue, based on the Ford Escort Mk II.

The vehicle assumes a similar shape and layout to the original Retinue, but assumes a straighter and squared-off bodywork design. The front end is basic in appearance, having a rather flat colored bumper with two small meshed intakes, while the upper area consist of a black rectangular section that is straighter than the one from the predecessor, having a black grille with eight dividers on it, the Vapid logo on the center of the grille, silver headlight housings with two circular units and four large meshed vents below the grille. The hood is mostly flat and has a slightly impressed area on the center, while the section near the base of the windshield has dual vents and the corresponding wipers.

The sides of the car are somewhat similar to the original Retinue, but the wheel arches are slightly bulkier, the skirting area is more in line with the rest of the body and the body lines are uniform, passing through the entire car, while the doors have colored handles. The greenhouse area is also similar to the original Retinue, but all windows have black trim around and are much larger in appearance, with silver, square-shaped mirrors mounted near the A-pillars.

The rear section consist of a small trunk that is slightly more elevated and angular than the original Retinue, albeit having no details like the safety pins or the rear vents like the former. The rear end has similar tail lights and features as the original version, but the details beside the license plate, the trims of the tail lights and the rear bumper are finished in black, while the license plate is flat. The area below the car features a cylindrical exhaust pipe on the driver side.

The interior retains the same dial set and features as the original version, albeit with slight tweaks to the radio set and other small details (the oil gauge is located on the left side of the main gauges and the aircon unit is placed on the far left of the dashboard, outside the panel).

The primary color of the car is applied on the bodywork and the interior stitching, while the secondary color is applied on the fender arches and the engine cover. It uses a set of rims identical to the "Stanced EG" tuner rims available in Los Santos Customs.

The Mk II Retinue comes with slightly above average top speed and fairly average acceleration in the sports classics class. On tarmac, the car's grip is fairly good, though there is a tendency for wheelspin to occur if a driver does not launch smoothly. In terms of cornering, the Retinue Mk II is very stable and despite being an FR drivetrain car, does not often suffer from uncontrollable oversteer. To complement the fairly stable handling, the braking is fairly good also.

Away from the tarmac, however, the Retinue Mk II is an incredibly strong performer, rivaled in its class only by its predecessor. The car exhibits incredible amounts of grip on gravel and dirt trails. Like the Retinue, such is the level of grip, that combined with the car's relatively high centre of mass, drivers should be especially wary of banks on the inside of corners, as attacking these too aggressively will encourage the car to tip onto two wheels and even roll over if improperly managed.

The in-game model of the car includes a naturally-aspirated DOHC inline-4 engine. Curiously, this engine features four individual air filters, each one directly mounted onto an inlet of the intake manifold, as opposed to the single air filter that mounts onto all inlets on the real world RS1800 (and most racing vehicles with large air filters in this intake layout). Said engine is coupled to a 4-speed gearbox and powers the rear wheels, and shares the same engi e sound as the original Retinue, itself being a higher-pitched variation of the one used in the Elegy Retro Custom. 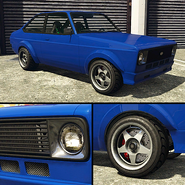 The Retinue Mk II in the cinematic preview on Rockstar Games Social Club. 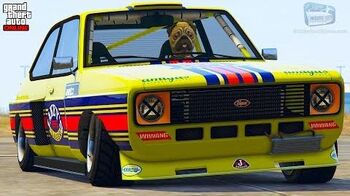 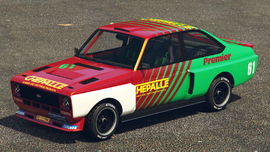 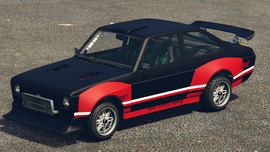