• ­There was a disturbance at the showroom.

• ­The Cops were alerted.

• ­Smashing the gate alerted the neighbourhood.

• ­The bike was abandoned.

• ­The bike was destroyed.

• ­Lamar is available for friend activities.

• ­Simeon Yetarian as a Director Mode character. (Enhanced version only.)

In-game time
“Franklin and Lamar go to a shady part of Vespucci Beach to repo a bike for Simeon.”

Lamar: "Ni**a, that's that Apache blood in me, homie. You lucky I ain't do a flying tomahawk and scalp they motherfuckin' ass."
Franklin: "We can't repo the assets of a dead man, "big sitting chief asshole!""
Lamar: "Ni**a, and we ain't going to neither, ni**a. I'm gonna keep this motherfucker for myself. Tell Simeon we couldn't recover it."
—Franklin and Lamar after repossessing the bike.

Repossession is a mission in Grand Theft Auto V, given to protagonist Franklin Clinton by Armenian car salesman Simeon Yetarian from his business in Pillbox Hill.

Franklin and his friend Lamar are tasked by Simeon to recover a motorbike sold to a gang member who refused to pay. The two make their way to a desolate back alley right next door to Vespucci Beach where Jimenez lives, and search for the bike in a few lockup garages before Lamar starts a gunfight with the owner's friends, the Vagos.

A car enters the compound and crashes, leaking fuel, prompting Franklin to shoot the spillage, setting the vehicle ablaze. Jimenez escapes on the bike, and Franklin and Lamar follow him in pursuit. After Franklin kills him, the duo splits up, Franklin takes the bike and meets with Lamar at the Car Wash in Innocence Boulevard, Strawberry. But in the words of Franklin "You can't repo the assets of a dead man" – so Lamar keeps the bike for himself, knowing that the repossession is now meaningless, only for the bike to become one of Franklin's personal vehicles afterwards.

Following the mission, Lamar finds out that Stretch is being released from prison and notifies Franklin of that.

After the beginning cutscene, the player has to go to Vespucci Beach with Lamar. The player can choose one of the three parked vehicles outside the dealership, or use their own vehicle to drive to the destination.

If the player at any point gets too far away from Lamar, this objective will appear. If the player doesn't return to Lamar and continues to go further away, the mission will fail.

When the player arrives at the destination, Lamar will exit the vehicle, and the player will have to follow him. The player will need to climb over the fence and walk to the end of the alley. On the way, Franklin and Lamar will encounter a drunk, which can be knocked out by Franklin, resulting in a comment from Lamar, and a truck with two Vagos members inside will pass them both. Causing any sort of disturbance in the alley or smashing the gate will fail the mission.

Pick up a weapon.

After choosing the right garage and watching the cutscene, the player simply needs to pick up the pistol that is lying on the ground.

Take out the Vagos.

Once the player picks up the weapon, it's time to kill all the attacking Vagos. There will be two enemies at first, it is advised to take cover by the garage exit. After the three enemies are killed, another one will walk up on the scaffolding. The player can either shoot the Vago or shoot the gas tank on the scaffolding, which will blow it up. Next enemy holds a Pump Shotgun, so the player has to be careful as it deals a lot of damage. Once that enemy is down, two more will pop up on the balconies, which can be easily killed by a headshot. Then, a Vagos gang member in a blue Penumbra attempts to drive off but is stopped by Lamar who shoots the gas tank and causes the gas to leak. The player can shoot the gas trail to blow up the car. The final wave of enemies will come out of the alleys and a building. Once these three are killed, the player is clear to exit.

When the player is near the exit, a Vagos gang member will drive up and turn around. The player can take this short opportunity to shoot the gang member off the bike. Otherwise, the player will have to chase the gang member across the city. If Franklin loses Lamar in the process by leaving him behind, the mission fails.

Get on the bike.

Regardless of the decision, once the gang member is killed/knocked off, the player has to get on the bike. This objective will also appear if, at any point, the player exits or falls off the bike.

Go to the car wash.

Once the player got the bike, all they have to do now is drive to the car wash in Strawberry to complete the mission.

Following this mission, Pump Shotgun, Hammer (Special/Collector's Edition and Enhanced version bonus), Broken Bottle, and SNS Pistol (both from Beach Bum Update) are available at Ammu-Nation. First Strangers & Freaks mission Pulling Favors is available, as well as next mission for Simeon. Lamar texts Franklin about Monkey Mosaics in Enhanced version, properly introducing that type of collectibles. It is available from the beginning though, after completing Franklin and Lamar. Letter Scraps are also available from now on. Player can call Lamar after that mission for friend activities. 24/7 convenience stores are open from now on. Simeon Yetarian is unlocked as a Director Mode character on XB1, PS4 and PC. Also, Lamar texts Franklin that he left the bike at Franklin's home some time later.

Several dead in suspected gang shoot-out.
Frank Edwards – Los Santos Meteor
"Police are scratching their heads as to what caused a violent shootout in Puerto Del Sol yesterday that left several gang members dead. The recent rise in gang crime continues unabated. An alley off Magellan Avenue in Vespucci Beach was turned into a war zone and the battle then spilled out onto the surrounding streets. Police are uncertain if this means drug wars between Hispanic gangs have reignited, or if this was simply a deal or an altercation gone wrong. The Vagos are known to have long-term turf wars both internally and with the city's other major street gangs, including the Aztecas who have been largely forced out of Los Santos into Blaine County, the Ballas and the Families. No one is clear on what caused this massacre, with LSPD spokesman Lee Whitless stating "We are desperately searching for someone to blame. We haven't found anyone yet, so we are probably going to try to say something silly like 'it's the fault of junk food or pollution', simply for something to say."

"A gang shootout in Puerto Del Sol. A quiet cul-de-sac erupted in gang violence as a bloody massacre left several Vagos gang members dead. A trail of devastation and no clear idea what happened, or why. Police don't know if this means drug wars between Hispanic gangs have reignited, or if this was simply a deal, or an altercation, gone terribly wrong."

Following Lamar through the Vagos alley.

Franklin fights his way through.

Franklin arrives at the car wash. 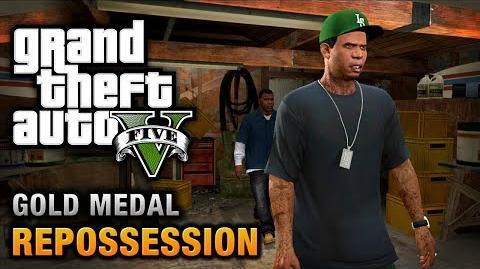 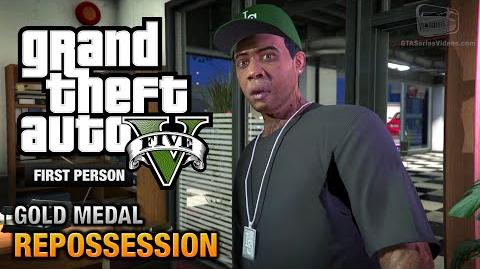 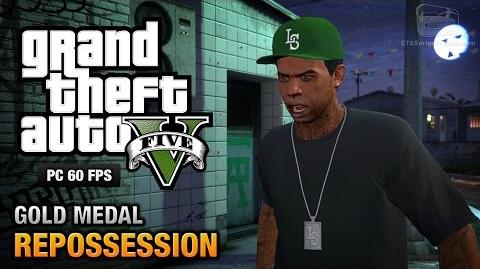