12:00
“My people have a saying. If you want to kill a lot of birds, bring a big stone. Don't worry, I will explain. I have some clients and competitors who have tried my patience for too long - these are my birds. And the new delivery of monster trucks for Arena Wars - these are my stone. I just need someone to throw it.”
— In-game description.

The players must travel to the car park of the Maze Bank Arena in La Puerta, where they must each steal an Apocalypse Sasquatch – the number of these will be the same as the number of players.

Once the monster trucks are obtained, the players must destroy various vehicles – two Jester Classics driving around the city, nine Dilettantes parked in the car park at LSIA, and seven Primo Customs located at the Benny's Original Motor Works garage in Strawberry; six of these are parked outside, while another one is inside the garage – as there is no way to destroy this one with the provided Sasquatches, there is a Jerry Can located nearby if the players wish to destroy this vehicle without wasting explosives. The players can destroy these by running over them with the truck, but they are not obliged to do so and can destroy them using other means, as well.

After all 18 initial vehicles are destroyed, Simeon will instruct the players to destroy more vehicles. These include a Deviant, Tulip, and Flash GT, all driving around the city, and seven Schafter V12s parked near the Vinewood Garage in West Vinewood – six in the car park and one around the back of the building; there is also a Jerry Can here, which the players can use to destroy this Schafter, as there is no way to reach it with the monster trucks.

Once all vehicles are destroyed, the players have to deliver the Sasquatches to Simeon's Delivery Garage in Terminal. After all the Sasquatches are delivered, the mission will be completed.

“The trucks should be waiting outside the arena now. I have seen to it that they will be left unattended.”
— Shortly after starting the mission.
“Beautiful, no? Now, let's break some eggs to make an omelet. Just don't wreck the truck.”
— Once the player steals a Sasquatch.
“Perfect. So perfect, I want you to do it again.”
— Once the initial 18 vehicles are destroyed.
“You are new employee of the month! Now lose the heat and bring the trucks to me.”
— Once all vehicle are destroyed. 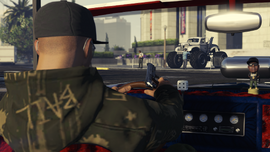 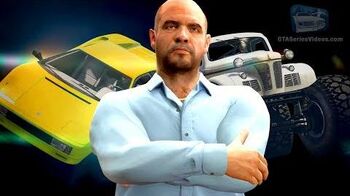