In-game time
“You know what a real man of people businessman is? In his heart of hearts? A problem solver. For example, I have a client with a very specific wish list. No problem - but he can only leave international waters for so long. At short notice, I must resort to some assertive repossession techniques. And this, my friend, is where you come in. I tell you which cars, tell you where they are, and you don't tell me what you had to do to acquire them.”
— In-game description.

GTA Today II is a Premium Deluxe Repo Work Mission featured in Grand Theft Auto Online as part of the continuation of the Arena War update, released on May 2, 2019, during the Survival Week event. It is given to the players by Simeon Yetarian and is available from 1 to 4 players.

The players have to steal either two, three, or four cars, depending on the number of players. These vehicles are labeled A, B, C, and D on the map and they need to be delivered to a ship docked in Terminal. Cars C and D only appear if there are three or four players, respectively.

Car A (a Sentinel Classic) has two possible locations, both in alleyways in Chamberlain Hills. It is guarded by several gang members.

Car B (an Ellie) is located between some buildings on Palomino Avenue, Little Seoul. It is guarded by five gang members.

Car C (a Swinger) has two possible locations. It is either parked in an alleyway in Rockford Hills, between Portola Drive and Eastbourne Way, or on Portola Drive. It is not guarded.

Car D (an Elegy Retro Custom) also has two possible locations. It is either parked in an underground car park in Pillbox Hill, accessed from either Las Lagunas Boulevard or Alta Street, or in a car park on Alta Street, Pillbox Hill. It is not guarded and can easily be stolen.

Once all two or four initial vehicles are delivered to the docks, Simeon will instruct the players to steal another batch of two or four cars. Again, cars C and D only appear when there are three or four players, respectively. If there are two or more players, all the vehicles will be watched by law enforcement; the players will receive a three-star wanted level.

Car A (an Ellie) is located atop a multistorey car park in Del Perro.

Car B (a Swinger) is parked inside an impound garage at the Mission Row Police Station, Mission Row, as it has been seized by law enforcement.

Car C (An Elegy Retro Custom) has two possible locations, both in Vespucci Canals. It is located either on Invention Court or Prosperity Street.

Car D (A Sentinel Classic) is parked in a car park on Carcer Way, Burton, under the Rockford Plaza shopping centre.

Once all four vehicles are delivered to the docks, the mission will be completed.

“A little time is a lot of money, my friend. You have the list. Get me the cars.”
— Shortly after starting the mission.
“You are a professional, yes? Good. Because every dent in that car is coming out of your paycheck, not mine.”
— After stealing the first vehicle.
“Think fast. We have some last-minute requests. Tick tock!”
— After delivering all 2-4 initial vehicles.
“Someone invited the feds. They've taken one car already. They will be watching the others.”
— Shortly after receiving the previous text. 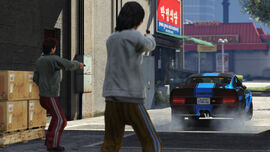 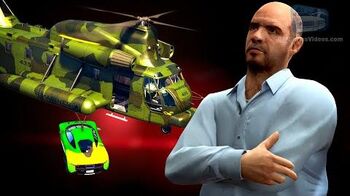