“Live the dream with your very own shuttle bus! This is so uncool, hipsters have started driving them ironically. Perfect for transporting groups of senior citizens to retirement homes or fat tourists to all-inclusive hotels.”
— Warstock Cache & Carry description.

The Rental Shuttle Bus is a minibus with an identical design to the Tourbus, itself being a first generation Burrito with an extended chassis and a large, wide compartment on the back, similar to the Camper. This compartment has eight seats that passengers can use, and what appears to be two access doors (although these are not functional and the occupants simply warp directly to the rear seats). On the inside it says, "Welcome to Los Santos," and it has FlyUS seat covers. The bus also has Light Smoke window tint applied by default.[1]

The vehicle performs poorly in all areas of handling; due to its size and weight, acceleration and top speed are mediocre. Handling leaves much to be desired, as it has a very wide turning radius and it suffers from understeer. Its soft suspension also leads to excessive body roll. Durability is average, as the bus can withstand a fair amount of abuse before its engine fails, and it can ram other cars off the road quite easily. It shares the handling with the Tour Bus.

The vehicle appears to be powered by a transversely laid, double overhead camshaft Inline-4, which is stated to be a 4500cc (4.5L) Turbo Diesel engine similar to the Ambulance. The sound emitted when at idle and accelerating sounds like a typical low-revving diesel engine, similar to the Burrito and most vans. This would be vital considering how heavy the vehicle is.

The Rental Shuttle Bus on the Rockstar Games Social Club.

The Rental Shuttle Bus in the cinematic preview on Rockstar Games Social Club. 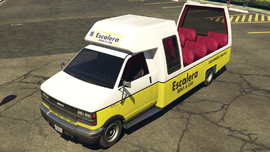