Reni was born a woman, presumably in Munich, Germany. Prior to 1984, she had her first sex change to become a man, later transitioning back to a woman, and then a man again. Surgical sex changes date back to Berlin, Germany as early as 1930, though the surgery is generally considered irreversible in real life, as opposed to Reni's multiple transitions. In Europe, she became famous for shooting avant-garde art films which included child torture in a Berlin pizza parlor and a rhinoceros making love to a neon sign. On Flashback FM, she also mentions having been a prostitute and being in pornographic films (while female).

Reni eventually moved his entire production company to Vice City, where he produced commercials and "edgy" pop music videos. Frankie served as his assistant throughout much of this time. His associates included Ricardo Diaz, a drug supplier, Diego Mendez, another drug dealer and former lover, Barry Mickelthwaite, the manager of Phil Collins who slept with Reni in Monaco while drunk, Spitz, another film director who was also interested in buying coke, Vic Vance, a drug dealer who Spitz put Reni in contact with and Gonzalez, another drug dealer Reni was in contact with.

For most of the 1980s and 1990s, Reni had a promising career in adult film. In 1998, she became the DJ for Flashback FM in Liberty City, where she talked extensively about her own sexual experiences (like having to poison her pet dog as a child before being abused by her uncle). Sometime between 1998 and 2001, she was replaced by Toni as the DJ. Her life after this point is unknown.

Non-chronologically, this was her first appearance in the Grand Theft Auto universe, around which the rest of her character was built.

Artwork of Reni Wassulmaier (after her fourth sex change).

Reni in So Long Schlong. 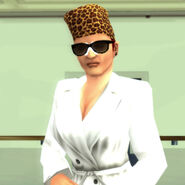 Reni after her fourth sex change following "So Long Schlong". In addition to a new pair of breasts, her nose is also implied to be reconstructed, among other changes. As seen in the mission In the Air Tonight before going to the airport.