Standard White - 100%
“Bow down because you're in the presence of JDM nobility. the dynastic prowess of the Annis Remus is a powerful thing. An example? Just kick the back out through the middle of Legion Square, thinly spread a couple dozen onlookers across the tarmac, and listen to nothing but thunderous applause. Long live the emperor!”
— Southern San Andreas Super Autos description.

The Annis Remus is a 2-door sports coupe featured in Grand Theft Auto Online as part of the Los Santos Tuners update.

The Remus is heavily based on the 1988–1994 Nissan Silvia (S13) coupe. The headlights are shaped similarly to the S13 Silvia, albeit with the edge of the outer part section being sloped downwards, while the arrangement is influenced by the 1989–1991 Nissan Skyline (R32). The front bumper is derived from the 1989–1994 Toyota Corolla (E90). The entire rear fascia of the Remus seems to be based on the 1989–1993 Honda/Acura Integra (DA5-DA9/DB1-DB2) coupe and liftback.

The vehicle assumes a rather linear design and a two-door layout, comparable to the Elegy Retro Custom. The front the car features a small bumper with a black detail above, dual intakes spanning about half the car's width and rectangular amber lamps beside the upper intake, as well as a number plate mounted on the centre, partially covering the lower intake. The area above the bumper is seemingly narrow, having a small mesh grille on the centre with silver "ANNIS" lettering over it and black housings beside it, containing rectangular headlamp units, inner square fog lamps and small indicators on the outer edges. The bonnet is relatively simple and features an elevated area on the centre, which is about as wide as the grille.

The sides of the car feature thin body lines conforming the skirting area, black details between the wheel arches, painted door handles and thin ridges passing through the car, with smaller ones near the front quarters. The cabin area has black trim around the windows, black inner pillars and large mirror wings near the A-pillars.

The rear of the car consist of a small boot lid with silver badging on the rear and a spoiler on top, while the outer sides house wide tail lamps, consisting of white upper lamps and lower red lamps. The bumper has black details on the upper side and a dedicated section for the number plate, along with a single exhaust tube on the passenger side and two mouldings intended for dual exhaust setups.

The interior and dial set are the same ones from the Elegy Retro Custom, itself being a derivative of the one from the Sultan and the Sultan RS. Similar to the Elegy Retro Custom, the car bears the Annis logo on the steering wheel, albeit using the gray variation rather than the blue one from the aforementioned car. The interior can be also modified to feature additional analog gauges, digital displays and numerous switches, in a similar manner to race-type cars such as the RE-7B and the ETR1.

Most of the car's body is painted in a primary colour, while the portions below the black details and the stock spoiler are painted in a secondary colour. A trim colour is also available for the interior, as well as a dial colour that also affects some of the custom exhaust options. It uses a unique set of rims, consisting of a large dish with eight angled spokes on the outer surrounding and a circular detail with four bolt details around the centre. The car is fitted with medium-profile tyres. 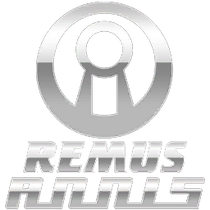 The Remus has acceptable acceleration and a good top speed. Handling is also great; the car is noticeably stable, and has substantial amounts of grip. Uneven terrain and bumps in the road are easily absorbed by the suspension. The Remus tends to have neutral handling (no oversteer or understeer) even when driven hard, making it a good candidate for Street Races. Despite its maxed out traction, the Remus will eventually lose grip and spin out if the player does not let off the throttle. And even with full engine upgrades, the Remus feels relatively sluggish in nature, especially on longer straights, struggling to keep up with faster cars without the use of slipstream.

Crash deformation is acceptable and similar to other Los Santos Tuners vehicles; the bumpers, doors, hood, and trunk will become loose and/or open after a few impacts, but the headlights are very prone to breaking during a front-end collision.

The Remus features an Inline-4 engine, stated to be naturally aspirated and having 20 valves (suggesting it has five valves per cylinder). It is coupled to a 5-speed gearbox in a front-engine, rear-wheel-drive layout, and its sound is a variation of the one used in the Elegy Retro Custom.

Front view seen in the official trailer for the DLC.

The Prize Ride Remus, carried by a Slamtruck. 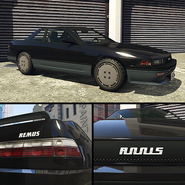 The Remus in the cinematic preview on Rockstar Games Social Club.