"Shoots a load in your mouth!"

"You chew, you suck then POW!"
―Release boxes.

"Release" is produced by Candybox. In GTA Vice City Stories, Release has three different flavours (peppermint, spearmint and cinnamon) sold in all Verdi Groceries stores but only two are sold in FIDL stores. However, the FIDL store in Washington Beach sell all three flavours. It is also advertised on a billboard outside Fort Baxter Air Base as well as the Vice City Inquirer, and on Wave 103. Their slogans are "Shoots a load into your mouth" and "You CHEW, you SUCK, then POW!".

In GTA IV, the player can download a Release theme for their phone via Vipluxuryringtones.com.

In GTA V, it is found inside 24/7, Limited Service and Rob's Liquor stores all over San Andreas in boxes. They are available same three flavors (peppermint, spearmint and cinnamon).

The gum may be based on Freshen Up Gum, a similar liquid filled chewing gum produced by Cadbury Adams. 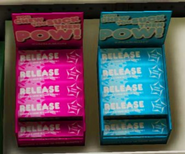 Ditto, boxes in a Limited Service store displaying all flavors
Add a photo to this gallery

Retrieved from "https://gta.fandom.com/wiki/Release?oldid=1254651"
Community content is available under CC-BY-SA unless otherwise noted.