Rehab Island is a reality TV show, produced by The Reality Mill and broadcasting on CNT in Grand Theft Auto V. It is not viewable by the player.

The show takes place on a small island where contestants are stranded in an attempt to break their addictions to illegal substances. During their time on the island, they must do anything they can to survive and win a prize. It is likely a parody of Survivor, most notably the 27th season, Blood and Water, which also takes place in 2013. The logo is a parody on the videogame Dead Island, albeit with the palm tree's fronds replaced with marijuana leaves, a reference to the drug addiction theme.

Imaging Voice: "It's the heartbreaking show of human struggle, love, redemption, hot morons doing drugs in bikinis! Tragedy equals comedy if you give it enough time. Rehab Island. We've put Darwinism into the ultimate struggle as people battle addictions and each other in this hit competitive sobriety show. We take people to the limit, push them over and run commercials in between. Alliances are formed."

Female Voice: "Get out! Get out of this hut!"

Female Voice 2: "I thought you loved me!"

Male Voice: "I love the coke! I love cocaine!" 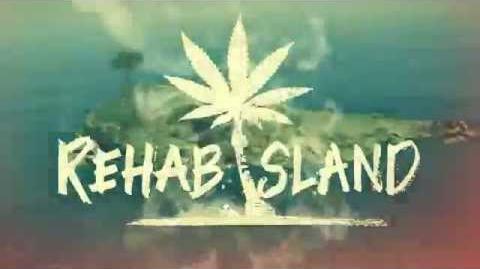 Retrieved from "https://gta.fandom.com/wiki/Rehab_Island?oldid=1169070"
Community content is available under CC-BY-SA unless otherwise noted.