A beater Regina in The Lost and Damned.

The Regina between GTA Vice City and GTA Vice City Stories is designed as a quintessentially 1980s American station wagon which bears a strong resemblance to the 1984-1988 Chevrolet Caprice Estate Wagon overall; however, the grille more resembles the Caprice's platform mate, the 1977-1989 Pontiac Safari. The high ride height could be influenced by the 1980-1987 AMC Eagle Wagon.

All renditions of the Regina are identical in design, with the exception of the GTA San Andreas rendition, which has single headlights on either side (opposed to the dual ones from the Vice City and Vice City Stories renditions) and separated tail lights that have similar design to those from the Rancher.

In The Lost and Damned, the Dundreary Regina is designed as a lean 1960s/1970s station wagon with 1960s GM rally wheels, low ground clearance and faded paint. The vehicle's overall body design and greenhouse are now based on the older 1966-1970 Caprice Estate Wagon while also taking influence from the 1969-1973 Chrysler Town & Country, mainly in the grille design.

The car retains the dual headlight setup from the Vice City and Vice City Stories renditions, but the lamps themselves are rounded, and the turning lights are moved onto the bumper. The tail lights are somewhat identical (albeit smaller) and features reverse circular lights on the rear bumper. The rear compartment has "DUNDREARY" on the lower side between the tail lights and the car's name is seen on the passenger side. The Regina now sports a combination of a primary color on the body and the secondary color on the roof (normally dark grey or black), as well as a chrome roof rack.

The car is largely similar to its TLAD counterpart, but with some styling differences on the front end and the hood. The vehicle has lost its beater appearance from The Lost and Damned, and is now found in a restored condition, featuring a wooden trim on the lower portions of either side.

The Regina can be found with no roof accessories or with two different roof racks: a small chrome one that occupies the rear section or a large chrome one fitted with wooden planks that occupies the entire roof. Both of these may sometimes have various amounts of boxes and suitcases tied to it, resulting in four different variations.

Between GTA Vice City and GTA Vice City Stories, the Regina's acceleration is modest, and its speed is severely lacking - with the Regina's front-wheel drive powertrain, the underpowered V8 struggles to move this behemoth. Handling is sluggish, the car suffers from obvious understeer, and the brakes do a barely acceptable job of slowing the enormous chassis. The Regina is not especially sturdy, nor capable of withstanding heavy damage, and is a generally undesirable vehicle.

The FWD layout is the opposite of its real-life inspirations, as these cars are usually RWD.

With a significant cosmetic change, the Regina in The Lost and Damned sports several noticeable differences in its performance. Due to its heavier weight, the car is less nimble than its predecessors, occasionally requiring the aid of the handbrake in tight corners or high speed turns. Braking power is correspondingly below average. The suspension may be insufficient on the road, as the car heavyness on the rear section will disrupt it when sorting out low obstacles such as curbs.

The car is also classified as one of the Beaters cars in GTA IV, emitting a knocking sound from the engine at high revs, occasionally taking a noticeably long time to start, and backfiring through its exhaust pipe.

The Regina is powered by a high displacement V8 engine coupled to a 5-speed manual transmission in an FR layout. The car shares its handling with the Solair, but its engine sound is the same as that of pickup trucks like the Bobcat and the Rancher.

The Regina's performance across the board is poor. It has very poor acceleration, and a top speed which leaves much to be desired. Its handling is acceptable at least, but it tends to oversteer when attempting to corner at speed. Braking is poor, and has a long braking distance despite being a slow vehicle already. Crash deformation is remarkably strong, and is able to take a few decent hits before being disabled. The Regina has very low torque, and that means it will have major issues attempting to climb hills, and control is practically nonexistent when attempting to descent from a decent-sized hill.

The engine is modeled after a single-overhead camshaft V8, with a large cylindrical air filter fitted above the engine block, now coupled to a 4-speed gearbox. The Regina shares its engine sound with the Peyote.

Pre-release screenshot of the Regina.

Side view of the Regina, with small roof rack and no luggage.

A Regina with small roof rack and luggage.

A Regina with large roof rack and no luggage. (Rear quarter view)

A Regina with large roof rack and luggage. 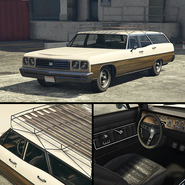 The Regina on the updated Rockstar Games Social Club.

The Regina in the cinematic preview on the GTA V Rockstar Games Social Club.

The Regina in the cinematic preview on the GTA Online Rockstar Games Social Club.

The Regina is part of the vehiclemodelset, "CARS_STATION_WAGON". This set of cars is exclusive to the Regina, Stratum and Ingot. It isn't very common, but does appear in specific locations which guarantees a 1/3 chance of the Regina spawning.

​The Lost and Damned